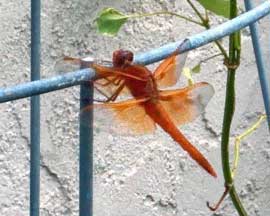 Dragonflies are predators, both in their aquatic larval stage, when they are known as nymphs or naiads, and as adults. Several years of their life are spent as a nymph living in freshwater; the adults may be on the wing for just a few days or weeks. They are fast agile fliers, sometimes migrating across oceans, and are often but not always found near water. They have a uniquely complex mode of reproduction involving indirect insemination, delayed fertilisation and sperm competition. During mating, the male grasps the female at the back of the head or on the prothorax, and the female curls her abdomen under her body to pick up sperm from the male’s secondary genitalia at the front of his abdomen, forming the “heart” or “wheel” posture.

Loss of wetland habitat threatens dragonfly populations around the world. Dragonflies are represented in human culture on artefacts such as pottery, rock paintings and Art Nouveau jewellery. They are used in traditional medicine in Japan and China, and caught for food in Indonesia. They are symbols of courage, strength and happiness in Japan, but seen as sinister in European folklore.

Behavior: Orb weavers are very docile, non-aggressive spiders that will flee at the first sign …