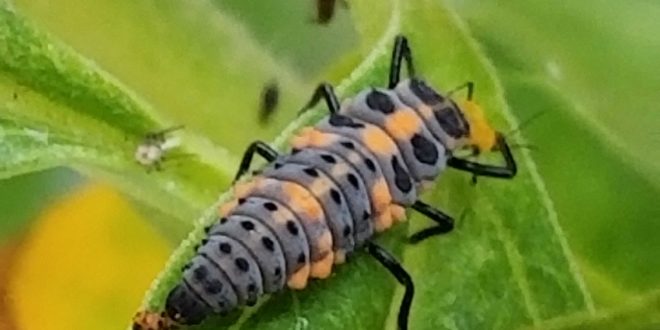 Ladybugs and Ladybug larvae are beneficial insects for your garden because they eat aphids. Ladybugs are known by several other names: lady beetles, ladybug beetles, and ladybird beetles. Regardless of what you call them, these beetles belong to the family Coccinellidae. All ladybugs progress through a four-stage life cycle known as complete metamorphosis.

The ladybug life cycle begins with an egg. Once she has mated, the female ladybug lays a cluster of five to 30 eggs. She usually deposits her eggs on a plant with suitable prey for her offspring to eat when they hatch; aphids are a favorite food. In a three-month period that commences in spring or early summer, a single female ladybug can produce more than 1,000 eggs.

Scientists believe ladybugs lay both fertile and infertile eggs in the cluster. When aphids are in limited supply, the newly hatched larvae will feed on the infertile eggs.

In two to 10 days, ladybug larvae emerge from their eggs. Species and environmental variables such as temperature can shorten or lengthen this timeframe. Ladybug larvae look somewhat like tiny alligators, with elongated bodies and bumpy exoskeletons. In many species, the ladybug larvae are black with brightly colored spots or bands.

In the larval stage, ladybugs feed voraciously. In the two weeks it takes to become fully grown, a single larva can consume 350 to 400 aphids.4﻿ Larvae feed on other soft-bodied plant pests as well, including scale insects, adelgids, mites, and insect eggs. Ladybug larvae don’t discriminate when feeding and will sometimes eat ladybug eggs, too.

The newly hatched larva is in its first instar, a developmental stage that occurs between molts. It feeds until it grows too big for its cuticle, or soft shell, and then it molts. After molting, the larva is in the second instar. Ladybug larvae usually molt through four instars, or larval stages, before preparing to pupate. The larva attaches itself to a leaf or other surface when it is ready to pupate, or metamorphose, into its adult form.

In its pupal stage, the ladybug is usually yellow or orange with black markings. The pupa remains still, attached to a leaf, throughout this stage. The ladybug’s body undergoes a remarkable transformation, directed by special cells called histoblasts. They control a biochemical process through which the larval body is broken down and reformed into the adult ladybug.

The pupal stage lasts between seven and 15 days.

Newly emerged adults, or imagos, have soft exoskeletons, making them vulnerable to predators until their cuticles harden. They appear pale and yellow when they emerge but soon develop the deep, bright colors for which ladybugs are known.

Adult ladybugs feed on soft-bodied insects, just as their larvae do. Adults overwinter, usually hibernating in aggregations. They mate soon after becoming active again in the spring.

A garden plant prone to aphid infestations is a prime ladybug habitat. To familiarize yourself with the ladybug life cycle, visit this plant daily. Take your time examining the leaves, lifting them to observe the undersides, and you’ll likely find a cluster of bright yellow eggs.

Within a few days, tiny ladybug larvae will hatch, and you’ll find the odd-looking immature ladybugs on the prowl for aphids. Later, you’ll see dome-shaped pupae, shiny and orange. If aphids are abundant, adult ladybugs will hang around, too.