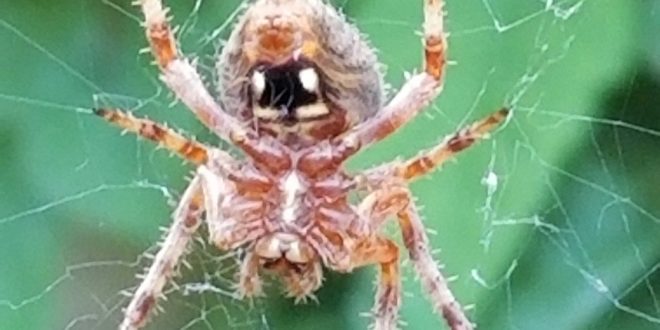 Orb weavers are very docile, non-aggressive spiders that will flee at the first sign of a threat (typically they will run or drop off the web). They are not dangerous to people & pets, and are actually quite beneficial because they will catch and eat a lot of pest-type insects.

Anywhere with abundant prey and structures to support the web – around light fixtures used at night, or tree branches, tall grasses, and bushes.

Most noticeable in late summer into fall, when webs and adults reach their largest size.

Food sources vary, but typically any small insects they catch in their webs. Some of the bigger orb weavers (Argiope genus) have been observed eating small frogs and humming birds (only if ensnared within the web).

Most orb weavers appear in the spring, but are not noticed until summer to fall.

The adult males will wander in search of a mate, and as such, typically do not stay on a web for long, if they spin a web at all. Adult males are not observed as much as the females, since they are always on the move, looking for that “Mrs. Right”. Typically after mating, the males will die.

The most commonly noticed orb weaver is female, since she sits on her web, feeding and eventually waiting for the males to find her. Toward the end of fall, the females will lay their last clutch of eggs, and then die at the first frost. The eggs can survive the winter (even withstanding freezing) due to the simplistic nature/chemistry of the eggs. The warmth of the spring will cause the eggs to mature, releasing a new generation of orb weavers.

A single egg sac can contain upwards of several hundred eggs. Juvenile orb weavers will spin “perfect” orb webs, but as they mature, the webs will become more distinctive and adapted for that particular species.

Put a medium-sized insect in the web of a large orbweaving spider in the garden. You will see the spider bite the prey, wrap it in silk, wait for it to die, then begin to eat. As a first step in eating, the spider will literally vomit digestive fluid over the prey. Then the prey is chewed with the “jaws” (chelicerae), and the fluid is sucked back into the mouth together with some liquefied “meat” from the prey. The spider repeats this process as often as necessary to digest, and ingest, all but the inedible hard parts. What is discarded afterwards is a small ball of residue.

Being bitten by an orb weaver is very uncommon, and typically the individual was “asking” to be bitten. Orb weavers will only bite if they feel threatened and trapped without a chance for escape (e.g. – like trying to pick them up). A bite is often compared to a bee sting, and for most people, is nothing serious. However, it is recommended to observe them in their environments (e.g. – on their web) and not to pick them up.

Orb weavers are typically nocturnal. During the day, the spider will prefer to either sit motionless in the web or move off the web. If the spider moves off the web (but does not abandon it), she will be nearby in some cover (rolled up leaves, or on a branch) with a trap line nearby. If prey becomes ensnared in the web, the trap line will vibrate, indicating a possible meal. The spider will investigate; if it is “meal worthy”, she will bite it to immobilize it, and wrap it with silk to either eat later, or to continue to subdue the meal while eating. If the trapped insect is not meal worthy, she will ignore it or eject it from the web.

At night, the orb weaver will become more active, working to repair any damage on the web, and sitting in the middle of the web. For some species, once morning starts to arrive, the spider will tear down the web and eat most of the silk (reabsorption of moisture plus consuming any dew that might have settled on the web). They will rebuild their web at dusk/night.