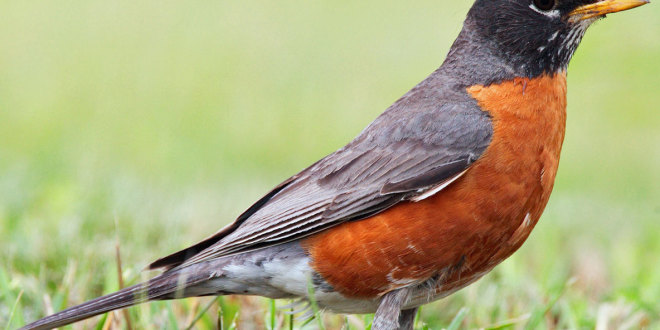 The quintessential early bird, American Robins are common sights on lawns across North America, where you often see them tugging earthworms out of the ground. Robins are popular birds for their warm orange breast, cheery song, and early appearance at the end of winter. Though they’re familiar town and city birds, American Robins are at home in wilder areas, too, including mountain forests and Alaskan wilderness.
Size & Shape
American Robins are fairly large songbirds with a large, round body, long legs, and fairly long tail. Robins are the largest North American thrushes, and their profile offers a good chance to learn the basic shape of most thrushes. Robins make a good reference point for comparing the size and shape of other birds, too.

Color Pattern
American Robins are gray-brown birds with warm orange underparts and dark heads. In flight, a white patch on the lower belly and under the tail can be conspicuous. Compared with males, females have paler heads that contrast less with the gray back.

Behavior
American Robins are industrious and authoritarian birds that bound across lawns or stand erect, beak tilted upward, to survey their environs. When alighting they habitually flick their tails downward several times. In fall and winter they form large flocks and gather in trees to roost or eat berries.