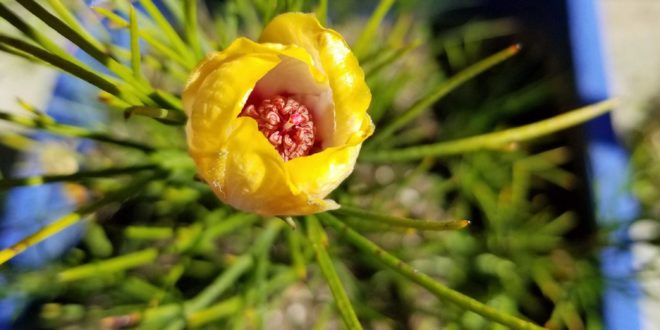 New for 2020 in our Sunnyvale garden is Alyogyne hakeifolia, an Australian desert shrub with hibiscus-like flowers and needle-like leaves. I purchased it from Yamagami Nursery. I am growing it in a 7 gallon pot.

It is a desert shrub which occurs in South Australia and in the southern part of West Australia.

Difference between Alyogyne and Hibiscus

At first glance, you might mistake it for an Hibiscus. All the current species of Alyogyne, except for A. cravenii, were previously included in Hibiscus. Alyogyne is distinguished from Hibiscus by the flowers having a style which is undivided to the stigmas, while in Hibiscus the style is branched to below the stigmas. Alyogyne is from the Greek alytos, united, undivided, and gyne, woman, ovary, alluding to the undivided style.

In the 1966 paper, P.A. Fryxell noted that “Alyogyne may be distinguished from Hibiscus by its characteristic six-toothed involucel, its semi-stipitate calyx, and its clavate style with decurrent stigmatic lobes“. He continued that in addition, the embryo is quite small and much simpler than that typical of Hibiscus and is completely enclosed by a well-developed endosperm, a tissue that is much reduced in Hibiscus.

Alyogyne have a number of characteristics that make them of horticultural value. They exhibit the rapid growth of Australian Malvaceae species but have several advantages over other Malvaceae species such as Hibiscus. The blooms usually last more than a day, in contrast to Australian species of Hibiscus which only last one day. There are none of the prickles associated with Hibiscus species such as H.heterophyllus and also they are less likely to cause allergic reactions than species with irritant hairs such as Lagunaria patersonii (Norfolk Island Hibiscus

There are five species in the Alyogyne genus.

Specimens of what is now known as Alyogyne hakeifolia were collected in 1802 by Robert Brown. Brown was the lead botanist on a scientific expedition to Australia on the ship Investigator. Though Brown’s brief was collect scientific specimens of all sorts, he was told to give priority to plants, insects, and birds, and to treat other fields, such as geology, as secondary pursuits. In addition to Brown, the scientific staff comprised the renowned botanical illustrator Ferdinand Bauer; the gardener Peter Good, whose task was to collect live plants and viable seeds for the use of Kew Gardens; the miner John Allen, appointed as mineralogist; and the landscape artist William Westall.

The Investigator arrive in Western Australia in December 1801. For three and a half years Brown did intensive botanic research in Australia, collecting about 3400 species, of which about 2000 were previously unknown. A large part of this collection was lost when Porpoise was wrecked en route to England. Brown remained in Australia until May 1805. He then returned to Britain where he spent the next five years working on the material he had gathered. He published numerous species descriptions; in Western Australia alone he is the author of nearly 1200 species.

Alyogyne hakeifolia is one of the watercolours from a sketch in 1803 which is included in the drawings of Ferdinand Bauer in “An Exquisite Eye”. At this time, the plant was known as Hibiscus filifolius.

Alyogyne hakeifolia was again illustrated, this time under the name of Hibiscus multifidus. It appeared in Paxton’s Magazine of Botany in 1839. It has also been known as Hibiscus hakeifolius, Cienfuegosia hakeifolia, Fugosia hakeifolia and as Alyogyne lilacina. Plants were grown in England in the early half of the 19th century.