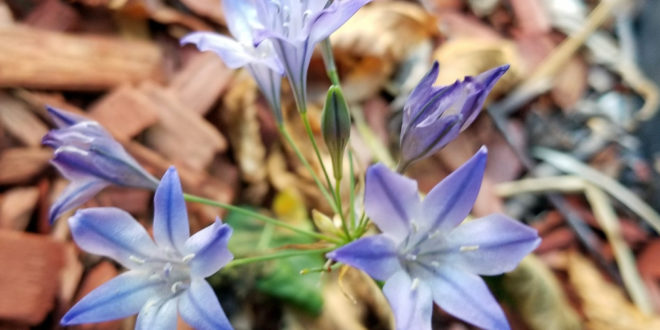 Brodiaea laxa is commonly known as the triplet lily, grassnut lily, or wild hyacinth. This perennial bulb is a native wildflower to California, growing wild in evergreen woodlands. Locally, it is found in places like Edgewood Preserve on the San Mateo County peninsula and Almaden Quicksilver County Park. Grass-like leaves appear first, followed by clusters of light blue blossoms reaching 15 to 20 inches tall and appearing in the late spring. Triplet lilies grow best in U.S. Department of Agriculture plant hardiness zones 7 through 10. Fall is the best time to plant these bulbs in flower beds and rock gardens. I grow it in my former fire-pit.

Queen Fabiola is a 20th century queen from the Netherlands. A hybrid of the lily was named a her.

It is also known as Ithuriel’s Spear. In Paradise Lost, written in 1667, John Milton writes that the angel Ithuriel is dispatched by Gabriel to locate Satan. The “grieslie King” is discovered in the Garden of Eden “squat like a Toad close at the ear of Eve”. By touching Satan with his spear, Ithuriel causes the Tempter to resume his proper likeness. Somewhere, somehow, the triplet lily was associated with the multi-prong spear. The first visit by Englishmen to California was on June 11 1579 by Sir Francis Drake when he visited Point Reyes California. It is conceivable that Drake brought back a bulb. The next visit by the English was about 1800.