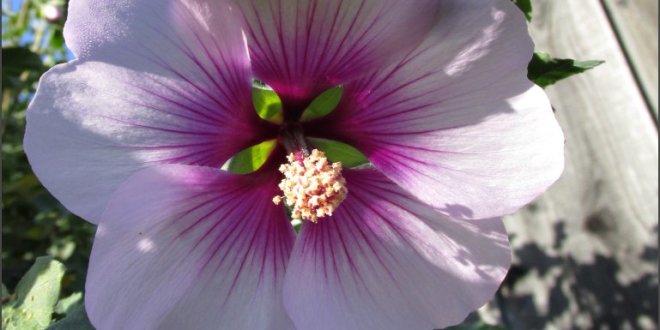 Cape mallows produce lots of flowers for most of the growing season.
The cape mallow (Anisodontea capensis) is an evergreen, shrub-like plant that produces abundant flowers during most of the growing season. The plant does well in sunny locations and makes a nice accent in a border or near a patio. Cape mallows can also make good container plants when given a large enough pot and some support.
Characteristics
Cape mallows are members of the Malvaceae family and native to South Africa. They usually reach a height of 2 to 3 feet at maturity, producing many slender, upright stems with three-lobed leaves that alternate along the stems. The single flowers have five flat petals arranged in a funnel-like shape and are reminiscent of hollyhock flowers. It’s suitable for Sunset Climate Zones 14-24 (which is fine for Sunnyvale); in warm areas, the plants may produce flowers most of the year, slowing down somewhat during cooler months.
Varieties
In addition to the native cape mallow species, Anisodontea capensis, several hybrid varieties are good choices for your flower garden. Anisodontea x hypomandarum is the most common hybrid available in nurseries, and differs only slightly from the native plant. It can reach a height of 4 feet at maturity, producing many pale pink flowers streaked with magenta. It’s suitable for Sunset Climate Zones 14-24 and 28. Another cultivar, Anisodontea ‘Tara’s Pink’ (Sunset zones 14-17 and 19-24), is a spontaneous hybrid that is tall, reaching a height of 6 feet or more. It has profuse numbers of large leaves and very large, clear-pink flowers. A third variety, ‘Tara’s Wonder,’ is also a tall plant that can be over 6 feet tall at maturity. It has deep-rose flower centers with radiating lavender stripes and very large dark-green leaves that are heavily lobed.
Requirements
Cape mallows do well in most locations, but prefer lots of sun and well-drained, loamy soil. Their water requirements are modest and they are very drought-tolerant once established, although they do best with regular watering. Feed cape mallows occasionally with a balanced fertilizer and restrict water during winter to give the plants a rest. Head back plants over winter to produce bushier growth in the spring.
Problems
Cape mallows are generally tough, disease-resistant plants, although they are susceptible to a fungus called mallow rust, or Puccinia malvacearum. This microorganism produces blisters on leaves, eventually causing the leaf tissue to yellow and die. Brown blisters also appear on leaf undersides of infected plants. These contain fungal spores that can spread the disease to other plants. Remove any infected plants immediately and clean plant debris from the ground over winter. Cape mallows are generally not susceptible to damaging insects, although Japanese beetles sometimes feed on the foliage. While this rarely does serious damage, it can cause unsightly areas on the plant that can be trimmed away.