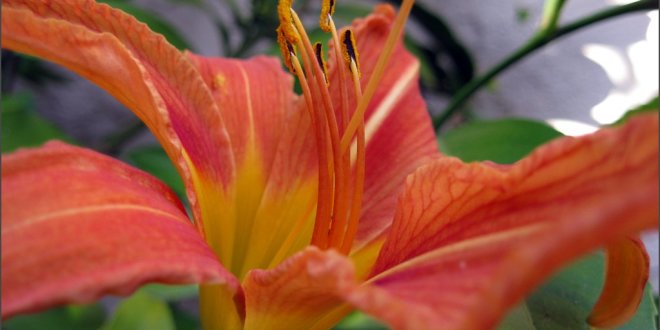 Hemerocallis fulva, the orange day-lily, tawny daylily, tiger daylily, fulvous daylily or ditch lily (also railroad daylily, roadside daylily, outhouse lily, and wash-house lily), is a species of daylily native to Asia. It is very widely grown as an ornamental plant in temperate climates for its showy flowers and ease of cultivation. It is not a true lily in the genus Lilium, but gets its name from the similarity of the flowers and from the fact that each flower lasts only one day.

It is an herbaceous perennial plant growing from tuberous roots, with stems 40–150 cm (16–59 in) tall. The leaves are linear, 50–90 cm (20–35 in) long and 1–2.8 cm (0.39–1.10 in) broad. The flowers are 5–12 cm (2.0–4.7 in) across, orange-red, with a pale central line on each tepal; they are produced from early summer through late autumn on scapes of ten through twenty flowers, with the individual flowers’ opening successively, each one only lasting one day. Each typical flower has six stamens attached at the base of the petals. Each stamen has a stalk called the filament that ends with a two-lobed anther filled with dust-like yellow pollen. The pollen is haploid and contains the sperm cells with a set of 11 chromosomes.