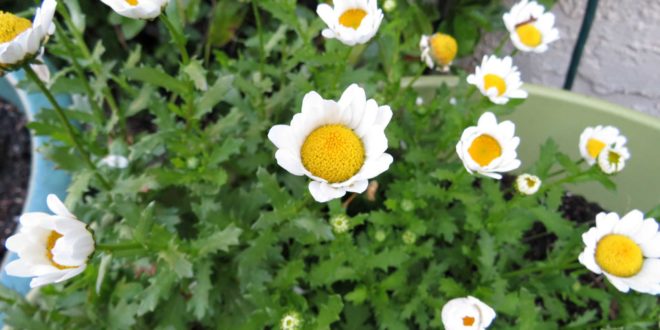 Feverfew (Tanacetum parthenium) is an attractive landscape plant with masses of one-inch, white, daisy-like flowers with large yellow centers rise on spindly stems above parsley-like leaves. The plant grows anywhere from eight to 24 inches tall and wide. This member of the aster family behaves like an annual in cooler zones, a perennial in some areas, and can be evergreen in the South. Though it looks similar, it’s not to be confused with true chamomile.

While native to southeastern Europe, T. parthenium is now widespread throughout Europe, Australia, and North America, where it grows in zones 5-10.

The name comes from the Old English feferfuge, from Latin febrifuga, from febris ‘fever’ + fugare ‘drive away’.

Chamomile and feverfew look alike. They are also similar in how they are used. They are both tea herbs that can be used in its fresh or dried form. Beyond that, they have a few important differences when it comes to their properties and their applications.

First, they taste different. The similarity of the chamomile flavor to that of apples has long been recognized. Pliny the Elder reported the fact that the herb’s scent was very much like the scent of apple blossoms. In addition to the apple note, chamomile’s fragrance has a strong floral quality. Feverfew does not have the apple flavor. Instead, it has a noticeable bitterness combined with a subtle element of citrus.

Chamomile is widely available; you can find it in most grocery stores, either in the tea aisle or the Mexican foods aisle. It is usually relatively inexpensive. Feverfew is much harder to find. You are unlikely to find it in the average grocery store.

You can consume feverfew and fresh chamomile (both the leaves and the flowers) raw in salads. Keep in mind that both of these ingredients are known for having a bitter flavor when consumed in the uncooked state. If you are seeking an herbal treatment for inflammation, both herbs can provide this benefit; however, it should be noted that feverfew is also a blood-thinner; So it should be taken with caution, especially if you are taking aspirin or other medications that have a similar effect. There are no such contraindications for chamomile.

Use feverfew in a tea for relieving headaches and in a salad where it will provide a bitter flavor similar to that of arugula or radicchio.

Use chamomile when you need a sleep aid or an herbal remedy for anxiety. If you are a home brewer who is making a wheat beer, chamomile is one of the flavoring ingredients that you will need. The floral and fruity sweetness of chamomile makes it great for desserts and alcoholic beverages.

Interestingly, this plant has a strong citrus-like aroma that repels bees, so don’t place T. parthenium near plants that rely on bees for pollination. Feverfew can self-pollinate and doesn’t require help from pollinators.

Plant it in full sun, or in an area that gets a bit of light shade.

Well-drained sandy or loamy soil with a pH of 6.0 to 6.7 is perfect for these plants.

You can start seeds indoors in late winter, or direct sow in your garden after all danger of frost has passed. Expect germination to take 10 to 14 days.

You can also transplant seedlings from a garden center or divide existing plants.

Feverfew reseeds quite liberally and can even be considered invasive, so keep an eye out for an abundance of emerging seedlings.

Apply a light, balanced fertilizer each spring, and keep roots moist throughout the year. This plant won’t tolerate dry conditions.