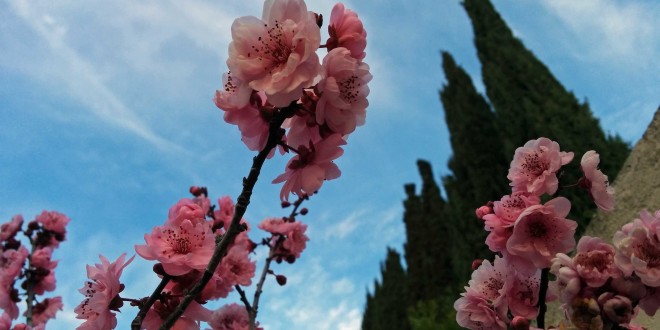 Also known as cherry plum or myrobalan plum, flowering plum (Prunus cerasifera) is a small to medium-sized ornamental tree native to Asia. Purple-leaved cultivars, such as the popular Thundercloud, are more common in the home landscape than the parent species, which has green leaves. Thundercloud grows to a height of about 20 feet, with a rounded habit, deep purple leaves and delicately fragrant pink blossoms.

The tree’s hardiness varies depending on the cultivar. Generally, flowering plums are suitable for U.S. Department of Agriculture plant hardiness zones 5 to 8. However the flowering plum does fine in Sunnyvale. The tree grows in full sunlight or partial shade and tolerates mild coastal conditions. Flowering plum does not do well in an exposed site that gets a lot of wind, as this can damage leaves and upper branches. The moderately drought-tolerant tree prefers well-draining, acidic soil, though it also tolerates alkaline and clay soils. I grow it in a very large pot.

Native to Mexico and the West Indies, angelonia (sometimes also called summer snapdragon) is an …