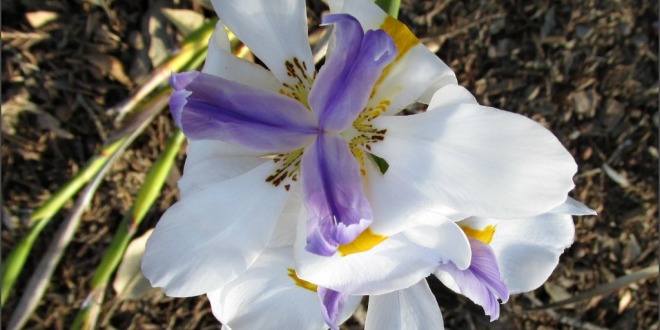 Attractive, light yellow iris-like flowers with vivid maroon blotches loom on stiff stalks over neat clumps. Fire resistant. Fortnight lily are evergreen perennials with spreading fans of stiff, leathery sword shaped leaves up to 2 ft in length but only 0.75 in wide. Be aggressive in your pruning of them.

The upright clumps of leaves are held in a vertical fanlike plane and they spread on creeping rhizomes which sometimes ascend a few inches. The 2-4 ft flowering stalks, which are perennial, are branched and stiffly wiry, bearing a succession of short-lived irislike flowers throughout spring and summer. The flowers, rather flattened and nearly 3 in across, are milky white with yellow markings on the three larger tepals. (The three petals and three similar sepals of iris flowers are collectively called tepals.) Fortnight lily fruits are 1-2 in football shaped, three-sided capsules.

Cv. ‘Johnsonia’ is taller than the species and has larger flowers and leaves that are decidedly erect. A series of hybrids, the Oakhurst Hybrids, are more spreading and have fancier flowers, often with purple centers and yellow splotches on the tepals. ‘Lemon Drops’ and ‘Orange Drops’ are Oakhurst Hybrids with yellow and orange tepal markings respectively.

Fortnight lily hails from Kenya and eastern Africa ranging south to South Africa at the tip of the continent.

Moisture: Once established, fortnight lilies tolerate poor, dry soils, but do best in a well drained soil with regular watering during the growing season. Reduce water and fertilizer after flowering.

Hardiness: USDA Zones 8 – 10. Fortnight lilies may be killed by severe winters in upper zone 8. Keep dry in winter and protect with mulch.

Propagation: Propagate fortnight lilies by dividing the rhizomatous clumps after the plants have flowered. The new divisions may take several weeks to get established, so be patient and pamper them for a while. They also can be grown from seed, and under ideal growing conditions, may even seed themselves.

The fortnight lilies are often grown in borders because the narrow leaves are evergreen, and provide a strong vertical element. They’re good along foundations, too. Fortnight lilies eventually form dense fan shaped clumps of leaves, and make a dramatic ground cover under large, tall trees. The flowers are beautiful, and although each lasts only a day, they are produced in profusion over an extended period from spring until late summer. They usually come in bursts, with a fortnight (two weeks) of rest between flowering events. Fortnight lilies seem to perform best in the light dappled shade of tall, open trees.