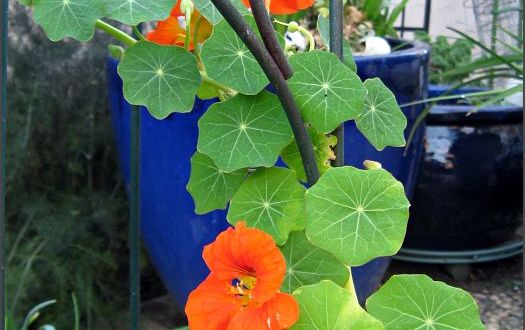 Tropaeolum, commonly known as nasturtium literally “nose-twister” or “nose-tweaker”, is a genus of roughly 80 species of annual and perennial herbaceous flowering plants. It was named by Carl Linnaeus and is the only genus in the family Tropaeolaceae. The nasturtiums received their common name because they produce an oil that is similar to that of watercress (Nasturtium officinale).

The genus Tropaeolum, native to South and Central America, includes several very popular garden plants, the most commonly grown being T. majus, T. peregrinum and T. speciosum. One of the hardiest species is T. polyphyllum from Chile, the perennial roots of which can survive the winter underground at altitudes of 3,300 metres (10,000 ft).

Plants in this genus have showy, often intensely bright flowers, and rounded, peltate (shield-shaped) leaves with the petiole in the centre. The flowers are bisexual and zygomorphic, with five petals, a superior three-carpelled ovary, and a funnel-shaped nectar spur at the back, formed by modification of one of the five sepals.