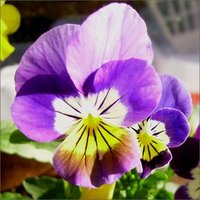 Plants grow well in sunny or partially sunny positions in well-draining soils. Pansies are perennial, but normally grown as biennials or annuals because of their leggy growth. The first year plant produces greenery, and bears flowers and seeds in its second year of growth. Afterwards, the plant dies like an annual. Because of selective human breeding, most garden pansies bloom the first year, some in as little as nine weeks after sowing.

Pansies are purchased as six-packs or “flats” (USA) of young plants from garden centers and planted directly into the garden soil. Plants will grow up to nine inches (23 cm) in height with flowers measuring two to three inches (about 6 cm) in diameter, though smaller and larger flowering cultivars are available.

Pansies are winter hardy in zones 4–8. They can survive light freezes and short periods of snow cover, but, in areas with prolonged snow cover, a covering of a dry winter mulch is recommended. In warmer climates, zones 9-11, pansies can bloom over the winter, and are often planted in the fall. In warmer zones, pansies may re-seed themselves and return the next year. They are not very heat-tolerant; warm temperatures inhibit blooming and hot muggy air causes rot and death. In colder zones, pansies may not survive without snow cover or protection (mulch) from extreme cold or periods of freezing and thawing. They perform best in zones with moderate temperatures, and equal amounts of mild rainfall and sunshine.

Pansies, for best growth, are watered thoroughly about once a week, depending on climate and rainfall. The plant should never be over-watered. To maximize blooming, plant foods are used about every other week, depending on the type of food used. Regular deadheading can extend the blooming period.

Aphids
Aphids, which can spread the cucumber mosaic virus, sometimes feed on pansies. Infestations are treated with a spray of diluted soft soap (2 ounces per gallon) or insecticides.

Leaf spot[edit] Leaf spot (Ramularia deflectens) is a fungal infection. Symptoms include dark spots on leaf margins followed by a white web covering the leaves. It is associated with cool damp springs.

Downy mildew
Pansy downy mildew is caused by the fungus-like organism Peronospora violae, which produces purple-brown leaf spots, often with encircling yellowing, that have an accompanying grey mold on the leaf underside. It can severely weaken or kill affected plants.[14]

Powdery mildew
A disease caused by one or more species of fungus in the Erysiphaceae family.[15] Symptoms include violet-gray powder on fringes and underside of leaves. It is caused by stagnant air and can be limited but not necessarily eliminated by spraying (especially leaf undersides).

Slugs and snails
Slugs and snails feed on the foliage. Sometimes sharp, gritty sand or a top-dressing of chipped bark is used by gardeners to limit damage.

Stem rot
Stem rot, also known as pansy sickness, is a soil-borne fungus and a possible hazard with unsterilized animal manure. The plant may collapse without warning in the middle of the season. The foliage will flag and lose color. Flowers will fade and shrivel prematurely. Stem will snap at the soil line if tugged slightly. The plant is probably a total loss unless tufted. The treatment of stem rot includes the use of fungicides such as Cheshunt or Benomyl, which are used prior to planting. Infected plants are destroyed (burned) to prevent the spread of the pathogen to other plants.