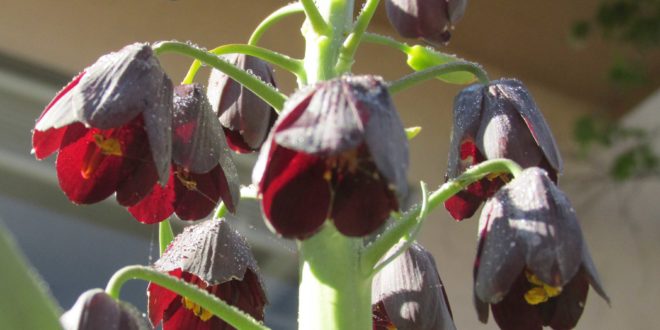 Spikes of deep maroon bells create an intriguing focal point in the spring garden. The tall stems are clothed with gray-green leaves, which are attractive in their own right. The Persian fritillary usually requires a season or two to establish itself.

There are about 100 to 130 species of bulbous plants in the family Liliaceae, native to temperate regions of the Northern Hemisphere, especially the Mediterranean, southwest Asia, and western North America. The name is derived from the Latin term for a dice-box (fritillus), and probably refers to the checkered pattern of the flowers of many species. Plants of the genus are known in English as fritillaries. Some North American species,called mission bells (F. affinis), are California natives. They can be found up and down the San Mateo peninsula in places like Edgewood Preserve and Windy Hill.

The Persian Fritillary was introduced into English gardens in the late sixteenth century, but at the time did not capture the same attention as its cousin, the Crown Imperial Lily. Bernard McMahon, Jefferson’s gardening mentor, listed the Fritillaria persica on his 1810 broadsheet.

This hardy bulb produces a two- to four-foot spike with glossy, blue-green foliage that features showy, bell-shaped, dusky purple flowers in mid-spring. Plant in a sunny, well-drained site, covering with 6-8 inches of soil. Best if lifted after foliage dies back and kept warm and dry. Replant in autumn.

Fritillaria extracts are used in traditional Chinese medicine. Most fritillaries contain poisonous alkaloids such as imperialin; some may even be deadly if ingested in quantity. But the bulbs of a few species, such as F. affinis, F. camschatcensis, and F. pudica, are edible if prepared carefully. They were commonly eaten by indigenous peoples of the Pacific Northwest coast.

At least one species, F. assyrica, has a very large genome. With approximately 130,000,000,000 base pairs, it equals the largest known vertebrate animal genome known to date, that of the marbled lungfish (Protopterus aethiopicus), in size. And for you plant geeks, an exciting article about plant genomes.