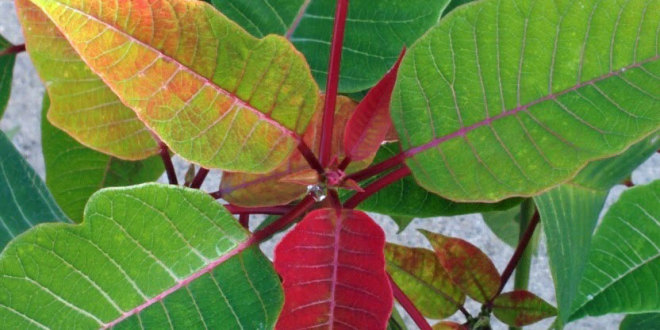 The poinsettia (Euphorbia pulcherrima) is well known for its red and green foliage and is widely used in Christmas floral displays. It derives its common English name from Joel Roberts Poinsett, the first United States Minister to Mexico, who introduced the plant into the United States in 1825.

Euphorbia pulcherrima is a shrub or small tree, typically reaching a height of 0.6–4 metres (2 ft 0 in–13 ft 1 in). The plant bears dark green dentate leaves that measure 7–16 centimetres (2.8–6.3 in) in length. The colored bracts—which are most often flaming red but can be orange, pale green, cream, pink, white, or marbled—are often mistaken for flower petals because of their groupings and colors, but are actually leaves. The colors of the bracts are created through photoperiodism, meaning that they require darkness (12 hours at a time for at least five days in a row) to change color. At the same time, the plants require abundant light during the day for the brightest color. The featured image above is of a two-year old bush that has not been forced into darkness.

The flowers of the poinsettia are unassuming and do not attract pollinators. They are grouped within small yellow structures found in the center of each leaf bunch, and are called cyathia.

The poinsettia is native to Mexico. It is found in the wild in deciduous tropical forest at moderate elevations from southern Sinaloa down the entire Pacific coast of Mexico to Chiapas and Guatemala. It is also found in the interior in the hot, seasonally dry forests of Guerrero, Oaxaca, and Chiapas. Reports of E. pulcherrima growing in the wild in Nicaragua and Costa Rica have yet to be confirmed by botanists.

In Nahuatl, the language of the Aztecs, the plant is called Cuetlaxochitl (from cuetlatl, residue, and xochitl, flower) meaning “flower that grows in residues or soil.” Today it is known in Mexico as Flor de Noche Buena, meaning Christmas Eve Flower. In Spain, Puerto Rico, Guatemala and other Central America countries it is known as Flor de Pascua or Pascua, meaning Christmas flower. In Chile and Peru, the plant became known as Crown of the Andes. In Turkey, it is called Atatürk’s Flower because Atatürk, the founder of the Republic, liked this flower and made a significant contribution to its cultivation for it to become widespread in Turkey. This name is given by botanists in the beginning of its cultivation in Turkey.

The plant’s association with Christmas began in 16th-century Mexico, where legend tells of a girl, commonly called Pepita or Maria, who was too poor to provide a gift for the celebration of Jesus’ birthday and was inspired by an angel to gather weeds from the roadside and place them in front of the church altar. Crimson blossoms sprouted from the weeds and became beautiful poinsettias.[11] From the 17th century, Franciscan friars in Mexico included the plants in their Christmas celebrations.[12] The star-shaped leaf pattern is said to symbolize the Star of Bethlehem, and the red color represents the blood sacrifice through the crucifixion of Jesus.

Poinsettias are popular Christmas decorations in homes, churches, offices, and elsewhere across North America. They are available in large numbers from grocery, drug, and hardware stores. In the United States, December 12 is National Poinsettia Day.