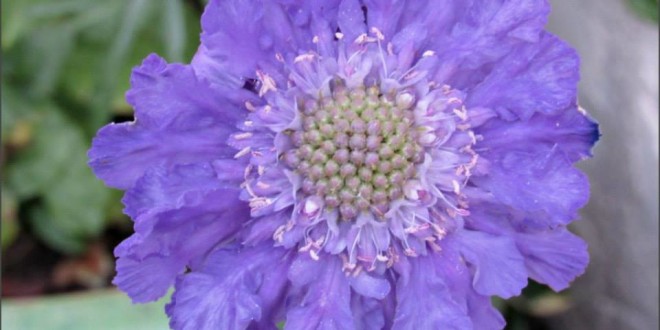 Pincushion flower is still blooming in winter in Sunnyvale. Scabiosa caucasica (Caucasian scabious) is a species of flowering plant in the family Caprifoliaceae, native to the Caucasus, north eastern Turkey, and northern Iran. Growing to 60 cm (24 in) tall and broad, it is a clump-forming perennial with divided leaves. Pincushion-shaped buds, borne on erect stems, open to pale blue or lavender flower heads, 8 cm (3 in) in diameter, from late summer through to autumn.

The plant is highly attractive to bees and other pollinating insects.

Excerpts from http://www.telegraph.co.uk/gardening/howtogrow/3349645/How-to-grow-Scabiosa-caucasica.html
The large, lavender-blue flowers of the Caucasian scabious (S. caucasica) have been a cut-flower staple for 150 years or more. But I value these frilly flowers for the contribution they make in the garden rather than the vase. These silver-washed beauties shine in July, August and September, when sunny yellows and oranges dominate. Their delicate presence is a gentle relic of a summer almost gone.
Scabiosa caucasica was introduced into Britain in 1803 after seed collected from the Caucasus was sent to the Hackney nurseryman George Loddiges. In the wild it is found in cool meadows and in the garden this plant seems to peak once the heat of summer starts to wane.
‘Clive Greaves’ is a selected seedling originally grown by market gardener James House, who ran a successful nursery near Bristol. The House family had previously dubbed a white form ‘Miss Willmott’ in honour of Ellen Willmott who gardened at Warley Place in Essex. They also developed their own seed strain, usually known as House’s hybrids, which are still available from Thompson & Morgan as young plants and seed (01473 695225; www. thompson-morgan.com).
‘Clive Greaves’, launched in 1929, has outperformed the others thanks to its strong constitution and free-flowering habit and has never been bettered. The real Clive Greaves was a racy young salesman who worked for Hewitt’s Nursery in Solihull. He promised to sell any plant named after him in huge quantities – and succeeded. But if the teetotal James House had realised how good a plant ‘Clive Greaves’ was, he would never have named it after a man reputedly fond of wine, women and song.
However, the lavender-blue ‘Clive Greaves’ became popular quickly and has survived for nearly 80 years. Admittedly, there are more striking blue selections of S. caucasica. ‘Fama’ is an intense purple-blue with a silvery centre and ‘Stafa’ is a light-centred darker blue. But both are less floriferous and harder to place than ‘Clive Greaves’.
All scabious are highly attractive to bees and butterflies. Our summer-flowering native, Scabiosa columbaria, is a compact, filigree-leaved plant with wiry stems topped by tiny Cambridge-blue pincushions. But perhaps the best small-flowered scabious of all is the sterile hybrid ‘Butterfly Blue’ – sometimes wrongly sold as ‘Irish Perpetual’. It will flower continually from June until late autumn, whether dead-headed or not. This first-rate perennial is often sold in bright pink pots that doesn’t exactly encourage the serious gardener. But I’m glad I overcame my prejudice. However, the pink-flowered version (‘Pink Mist’) is not as good – stragglier in habit and very prone to mildew.
The first scabious ever introduced was the small-flowered S. atropurpurea in 1591. This species comes from warmer areas of southern Europe. Often sultry and dark, it was given the common name “mournful widow”. Although it is technically listed as a short-lived perennial, few survive my Cotswold winters so I have to treat it as an annual. Seed companies often sell mixtures of white and dark, or plummy forms under names such as ‘Musical Score’ and ‘Beaujolais Bonnets’. There is also ‘Chile Black’; these atropurpurea types often have clean white stamens that embroider their dark pincushions.
Other good garden scabious include the exuberant and man-high June-flowering Cephalaria gigantea. Long-stemmed, lemon-yellow pincushions emerge from green buds that are diamond-patterned in black – wonderful if you have enough room. I also much admire the wine-red buttons of Knautia macedonica that billow out from June onwards, getting tinier and airier as the season wears on.
How to grow
All scabious prefer well-drained soil and a sunny position. They dislike cold, wet winters. A top dressing of grit in October will aid surface drainage. However they also hate hot, humid weather and do best in temperate conditions.
S. caucasica has long stems that initially produce one large flower. But if you snip the dying flower stem back to the lowest buds, halfway down, two slightly shorter-stemmed flowers will spring from the bud axils.
Deadheading encourages plants to flower on and on. But many scabious (and related genera) set seed prolifically if left. Seeds can be collected in autumn, dried and sown the following spring without losing viability.
Both S. caucasica and S. atropurpurea will flower in their first year if sown by March; the seeds germinate easily. Pot up individual seedlings into small pots and plant out by May. Selected forms like ‘Clive Greaves’ need to be divided to remain true to type as any seedlings are likely to be variable. Division can be done in spring but only once the plant has begun to grow away.
Good companions
Scabious are excellent support acts for late-flowering roses. The lavender-blue flowers of ‘Clive Greaves’ highlight any cream and apricot roses. They also make excellent subjects for a cutting garden. Darker, dainty-flowered penstemons work well with ‘Clive Greaves’; the dark ‘Blackbird’ or ‘Evelyn’ (a mid-pink with deep magenta markings) contrast well.
Soft blue also looks stunning against dark purple foliage, so growing an upright sedum like ‘Purple Emperor’, ‘Xenox’ or ‘Karfunkelstein’ with scabious will enhance both.
Pincushion Flower
Scabiosa caucasica

Other details:
Average Water Needs; Water regularly; do not overwater
This plant is attractive to bees, butterflies and/or birds