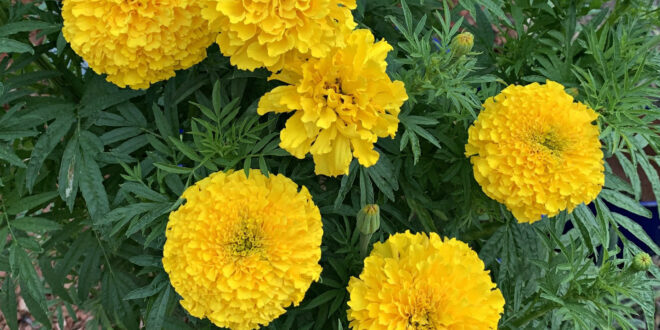 Marigolds are a favorite in our Sunnyvale garden. They attract butterflies, bees, ladybugs, and other beneficial insects. Give them full sun and some well-draining soil and watch them bloom from spring until fall. The marigold flower is the most used in the offerings that are made on the Day of the Dead.

There are approximately 50 species of marigold, but the 3 most common annuals are Tagetes patula, Tagetes erecta, and Tagetes tenuifolia.

Calendula, also called pot marigold, is not related to the common yellow and orange marigolds that most people know, but is an herb often grown for medicinal purposes.

Mexican tarragon (Tagetes lucida) is related but is mainly grown for culinary as well as medicinal uses.

Mexican marigold (T. lemmonii) is also related but is an evergreen shrub.

Marigolds are native in the Mexican states of San Luis Potosí, Chiapas, Puebla, Sinaloa, Tlaxcala, State of Mexico and Veracruz. They tend to grow in disturbed areas in hot, semi-warm, dry and temperate climates. The wild forms generally grow in areas of low deciduous forest, subdeciduous thorn forests and pine-oak forests. Sometimes it grows as a weed in corn crops.

Tagetes was described as a genus by Carl Linnaeus in 1753. The genus name Tagetes is from the name of the Etruscan god Tages, born from the plowing of the earth. It likely refers to the ease with which plants of this genus come out each year either by the seeds produced in the previous year, or by the stems which regrow from the stump already in place.

The name Cempasúchitl comes from the Nahuatl zempoalxóchitl which means “twenty petals”. Other names by which it is known are Thousand Leaves, Flower of the Dead, Cempoal and in other countries it is known as Mexican or Aztec Marigold.

The earliest written mention of Cempasúchil is in the Florentine Codex, a 16th century text written by the Spanish Franciscan friar Bernardino de Sahagún. The manuscript is a 2,400-page document of the culture and customs of the Aztec people. In it, de Sahagún describes the Aztecs’ medicinal use of various flowers and plants, noting the important role marigolds played in both medicines and celebrations.

Their use in these celebrations is believed to be tied to a romantic Aztec origin myth about two lovers, Xótchitl and Huitzilin. According to the legend, the lovers would often hike to the top of a mountain to leave flower offerings for the sun-god Tonatiuh, and to swear their love and commitment to one another. When Huitzilin is tragically killed in battle, a distraught Xóchitl prays to the sun-god to reunite them on earth. Tonatiuh, moved by her prayers and offerings, grants her wish by sending a ray of sun that transforms her into a flower as golden as the sun itself, and reincarnates her lover Huitzilin as a hummingbird. When the hummingbird, approaches Xóchitl the flower with his beak, her twenty petals bloom, filling the air with cempasúchil’s distinctive and powerful scent.

Formerly it was cultivated and used for ceremonial, decorative and medicinal purposes. In the latter field it was used to treat stomach pain, parasites, diarrhea, liver pain, vomiting, indigestion, colic, indigestion, cure eczema and for toothache, among others, either in infusions made with the stems and sometimes with flowers, or fried; although it was also used in baths, smeared or inhaled.

Current uses of this plant include the extraction of lutein, which is used as a food coloring, as a repellent for nematodes in tomato crops and as a supplement in the feeding of poultry since it gives the skin and yolk a more intense coloring.

Zones: Annual. Marigolds are appropriate for seasonal use in all zones.

Height/Spread: There are varieties available from 6 inches to 4 feet tall, and 6 inches to 2 feet wide.

Color: Marigolds are available in shades of orange and yellow; some with highlights of red, gold, copper or brass.

When to plant: Taller African varieties (Tagetes erecta) should be planted in early spring after all danger of frost has passed. Starting these taller varieties early in the season will allow them more time to grow and mature. French and Signet types (T. patula and T. tenuifolia) can be planted any time from spring through mid-summer.

Where to plant: Most marigolds prefer to be located in an area with full sun but will tolerate some shade. During times of extreme heat, some afternoon shade is beneficial. T. erecta varieties should be planted in an area protected from strong winds and damaging rainfall. These taller varieties may also require some light staking for support.

How to plant: Marigolds germinate quickly, sprouting within a few days and blooming in about 8 weeks, making them easy to grow from seed. Sow seeds directly outside after all danger of frost has passed and the soil has begun to warm up. Sow seeds 1 inch apart and water thoroughly after planting. After the seeds sprout, they should be thinned to the following guidelines: French or Signet varieties 8 to 10 inches apart, and African varieties 10 to 12 inches apart. Use landscape scissors or small garden shears to cut the seedlings out, as pulling them out can disturb the roots of the seedlings left behind. Seeds can be started earlier indoors, but with their fast germination time, this really isn’t necessary. Seedlings can be transplanted when 2 inches tall.

When transplanting marigolds purchased at a nursery, dig and loosen the soil about 6 inches down, with the final planting hole just slightly larger than the rootball. Backfill with soil and press firmly into place. Water thoroughly. Adding a 1 to 2-inch layer of mulch between the plants will help keep the soil moist and discourage weeds.

Marigolds grown in containers can become overcrowded, so be sure to space them accordingly.

Deadheading will improve the appearance of the plant and encourage further blooming later in the season. Pinching young plants will help promote bushier growth. Pinch and remove new growth at the top of the plant as close as possible to the next leaf nodes on the stem.

Marigolds aren’t too picky about their soil, but will be their best in moderately fertile, well-drained soil. If planted in clay soil or an area that doesn’t drain well, they may not perform as expected.

When transplanting, a 5-10-5 fertilizer can be added, but is completely optional. Marigolds grown in-ground generally don’t require any fertilizer. In fact, if fertilizer is applied during the growing phase, it can boost foliage growth at the expense of flower production. Marigolds in containers can benefit from a diluted liquid fertilizer watered in occasionally.

It is best to water marigolds at the base of the plant and not from overhead. The densely double flowerheads will tend to rot with excess moisture. Allow the soil to dry somewhat between waterings, but do water regularly in high heat or dry weather. Marigolds growing in containers should be watered daily as containers dry out quickly.

To save seeds, allow the flowerheads to fade and dry intact on the plant. When fully dried, remove the petals and shake out the seeds. Not all flowerheads will produce seeds, but most should. Remember that hybrids will not come true from saved seed.

Insects, Diseases, and Other Plant Problems: This plant is susceptible to powdery mildew, Botrytis, leaf spot, and rots.  Watch for spider mites or thrips.