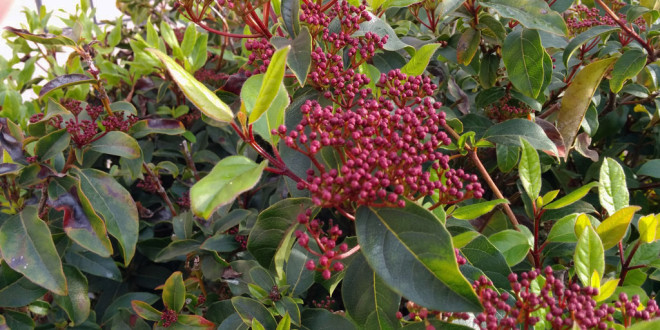 Viburnums are one of the most versatile genus of shrubs. They have pretty foliage and growth habits. They also have pretty, and sometimes even fragrant, flowers. The fruits are appealing to birds and other wildlife.
Viburnums are a genus of more than 150 evergreen, semi-evergreen and deciduous woody plants from the Adoxaceae family. They are native primarily to Northern temperate regions. Many of the hardiest are native to North America and are best grown in USDA Zones 3-8, with some variance by species. For example: my v.tinus does quite well in Sunnyvale (Zone 9). The shrub is prevalent in Mediterranean areas but is not drought tolerant and will need adequate moisture during hot, dry summers.
Viburnums are upright shrubs usually 6 to 10 feet in height with about a 4-foot spread. However, some varieties such as v. sieboldii can reach 20 feet or the height of a small tree. A few dwarf varieties such viburnum opulus ‘Nanum’ are less than 3 feet. The shrub’s leathery leaves, which are usually dark green on top and lighter in color underneath, are a perfect contrast to its creamy white to pink blossoms and dark red, blue or black berries. They can have either lacecap, domed or snowball-shaped clusters of flowers. Some varieties need a pollinator close by to produce a good showing of berries. The pollinator should be another viburnum of the same species, but a different variety.
Viburnums can be grown in just about any location be it sun or part shade. However, sun is preferable for flower and seed production. Give them moderately fertile (about 1/3 organic material) and moist, well-drained soil with a pH from about 5.6 to 6.6.

Some Favorite Varieties
Viburnum tinus (laurustinus) ‘Spring Bouquet’ is aptly named, as its blooms are most abundant in late winter and early spring. They begin as pale pink buds, which open into tight, 2 to 4 inch clusters of tiny, fragrant white flowers. Small lavender to deep purple berries accompany the flowers which bloom periodically throughout the year. It is this succession of buds, blooms and berries that is so attractive to birds, bees and butterflies. Thus, if the viburnums are threatened by an infestation of aphids, to which they are often prone, the birds can be of help in removing them. However, if all does not go accordingly to Nature’s plan, spray the pests with a strong stream of water or give them a dose of Neem oil. It also bears mentioning that this variety of viburnum is deer resistant.

Because of its dense foliage compared to other viburnums, laurustinus, as it is commonly called, makes an excellent hedge, foundation planting or even a single specimen. Viburnums do not require regular pruning. However, it is wise to cut back vigorous shoots for preferred balance and shape in early to mid summer. Do not deadhead or the plant will not produce its charming berries.

Another viburnum that is showy, but not as profuse as the laurustinus is viburnum plicatum var. tomentosum ‘Summer Snowflakes’ or doublefile viburnums, with an approximate mature height and width of 8 x 6 feet. Their 1 ½ to 2- inch, lacecap clusters of white flowers are perched along the shrub’s horizontally tiered branches from June through September. Their berries age from red to black and their foliage changes from deep orange to burgundy red in autumn.