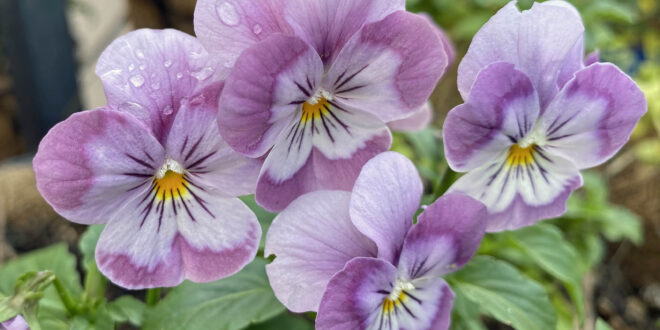 These little beauties were imported from Europe in the 18th century.  Viola flowers are smaller than their Pansy cousins – about the size of a nickel – but much more abundant. Violas also tend to be more heat and cold tolerant so that means an extended blooming season. The range of colors is not as extensive as Pansies but the traditional solid colors are available along with mixes like Penny Citrus Mix – a fun orange, yellow, and white combo.

Pansies were actually derived from violas, so technically all pansies are violas but not all violas are pansies. Violas are often called Johnny jump-ups in the US, as they tend to self-seed and can spread throughout your garden on their own.

While the blooms of violas are smaller than those of pansies, violas do have more blooms per plant. This means they can create a thicker layer of coverage in your flowerbed. Violas also have the tendency to trail a little bit and lie lower to the earth than pansies—typically at a height of 3 to 8 inches. If you decide to plant them in a container or planter with other flowers, position them near the edge to create a bit of overflow.

Because pansies do have much larger, more noticeable blooms than violas, they can create a bigger pop of color in your garden. They’re a bit taller—6 to 12 inches—than violas. They can also be found in a greater variety of colors, ranging from yellow, orange, red, and pink to violet, blue and white. Violas’ blooms are typically found in violet, blue, yellow, and white.

Violas are tougher in the wintertime than pansies, so they’re quicker to recover after hard freezes. Because of this, violas will have more blooms in January and February than pansies will.

Though pansies are likely a more popular option than violas, they’re not necessarily the better option. If you’re looking for the toughest cool season bloom that will produce all throughout the winter and into the spring, violas are a good choice for you! Do you want full coverage of color over your flowerbed? Go with violas! If you’re looking for the brightest pop of color with large, bold blooms, pansies are your best bet!

Both of these beauties thrive in full sun, though violas may bloom longer with partial shade. Want the best of both worlds? Pansies + violas are sure to make your garden a more colorful place this fall!