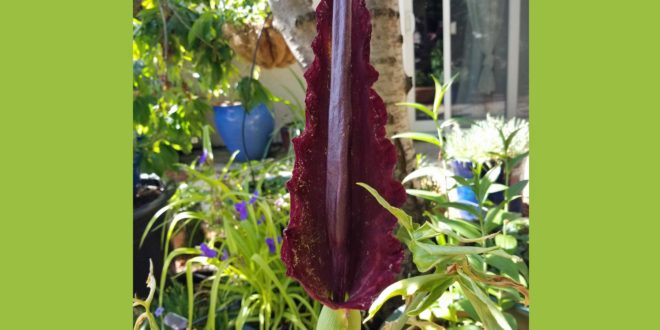 Voodoo lily plants are perennials known for their unusual foliage;  gigantic size of the flower; and the stink of that flower. The flowers produce a strong, offensive odor similar to that or rotting meat. The smell attracts the flies that pollinate the flowers. The blossom only lasts a day or two. They are native to warm subtropical-to-tropical areas of eastern Asia.

This plant in the philodendron family (Araceae) produces a single leaf from a subterranean tuber. The tuber can grow up to 50 pounds and a foot in diameter. The tuber shrinks away as the new leaf grows and during the growing season a new, larger tuber replaces it. The fleshy leaf stalk (petiole) is a mottled pinkish-gray and olive green. The single intricate leaf consists of a horizontal blade on the vertical petiole which is divided into three sections, giving an umbrella-like effect.

The size of the leaf is related to the size of the tuber, so the bigger the tuber, the bigger the leaf will grow, up to 4 feet across. Plants can grow up to 4-6 feet tall. Even in tropical climates voodoo lily requires a dry, dormant rest period every year. The leaf only lasts for one growing season and will naturally senesce in late summer or fall.

We planted Voodoo Lily in our Sunnyvale garden in 2018. We bought the corm at a local garden nursery, Yamagami. The plant is typically sold in the wintertime. Because of the small size of the tuber, it may take 3 to 5 years for the plant to flower. We are growing ours in two pots, each about 5 gallons: One in the courtyard, and one in the backyard. In 2019, the leaf stalks grew about a foot then died back in summertime as expected. In their second year, 2020, the leaf stalks are much taller: 2 feet.

The starchy tubers are edible and this plant is grown for food in some parts of the world, processed into a tasteless flour or stiff jelly (which can be used as a vegan substitute for gelatin). The Japanese use konjac flour to make shirataki noodles, and the starch is used to make a popular Asian fruit jelly snack. WARNING: Do not give konjac jelly candy to children. Choking risk!

The voodoo lily A. titanum is the largest flower in the world. A. konjac has smaller flowers, but it is still quite large compared to other garden flowers. Each bulb produces one stalk, about 6 feet tall, topped by one gigantic leaf. After the leaf stalk withers, the voodoo lily bulb produces a flower stalk. The flower is actually a spathe and spadex arrangement similar to a calla lily. The spadex can be 10 to over 50 inches long.

A voodoo lily bulb is up to 10 inches across, round and flattened. Buying Tip: Choose bulbs that are at least the size of a softball to get flowers the first year.

You will want to plant the voodoo lily bulb a good distance from your house so that the odor does not become too annoying. Plant the bulb in a location with full or partial shade in spring after the soil has warmed to about 60 degrees Fahrenheit. Cover them with 5 to 7 inches of soil. Care of Voodoo Lilies Once established, voodoo lilies are relatively carefree. The plant doesn’t need supplemental watering except during prolonged dry spells and never needs fertilizer. Remove the bloom when it fades, but allow the stalk to remain on the voodoo lily bulb until it withers. Voodoo lily plants are hardy in USDA zones 6 through 10. In cooler zones, you can lift the bulb for indoor storage after the foliage is killed back by frost. The bulb has no special storage requirements. Brush off the soil and set the bulb on a shelf until spring. The problem with bringing it inside is that the bulb will come to flower while indoors, and the smell is overpowering. Voodoo lilies can also be grown in pots. Use a pot 4 inches in diameter larger than the bulb. Allow the soil to dry out before watering. In zones cooler than 6, bring the potted bulb indoors for winter, but be aware of its unpleasant odor.

Read more at Gardening Know How: Voodoo Lily Info: Information On How To Plant A Voodoo Lily Bulb https://www.gardeningknowhow.com/houseplants/voodoo-lily/voodoo-lily-information.htm