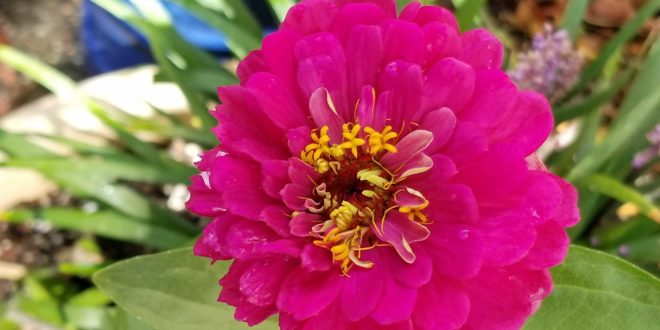 New for 2019 in our Sunnyvale garden, Zinnia ‘Benary’s Giant Wine’ features rounded, fully double flowers packed with wine-red petals and opening up to 6 inches across. As the flower matures, a circle of small golden stars surrounds its center disk. Resembling dahlias, they are borne on very long sturdy stems. Blooms early summer to frost. We purchased our seedling from the Annie’s Annual Collection at Yamagami Garden Nursery in Cupertino.

Most of the following info is from a post by Larry Rettig in 2011 on the Dave’s garden website….

Upon first seeing zinnias in bloom in Mexico in the 1500s, the Spanish conquistadors were not at all impressed, naming it mal de ojos, or “bad for the eye,” i.e., so ugly that one would not want to cast one’s eyes upon it.

Starting in the 1700s, botanists in Germany, Holland, and Italy began breeding by selection. The wild form of the white-flowered Zinnia acerosa eventually produced blossoms in several other colors. These, along with two selections from that strain, ‘Mammoth’ and ‘Striata’, made their way to this country in the early 1900s. They were an immediate hit with gardeners. By the 1920s, the first dahlia-flowered zinnia,‘Giant Dahlia,’ had made its appearance. It was discovered as a natural mutation of ‘Mammoth’ by John Bodger of California’s Bodger Seeds Ltd. Within the next few years he selected from this new strain a large flat-flowered type called ‘California Giant’.

Zinnias form a dense, compact mount up to 3 to 4 feet tall and 2 to 3 feet wide. Extremely easy to grow, zinnias are annuals that love full sun and prefer a humusy, evenly moist and well-draining soil. Great choice for back of sunny beds and borders or large containers. Excellent for cutting. Adored by butterflies, hummingbirds and birds