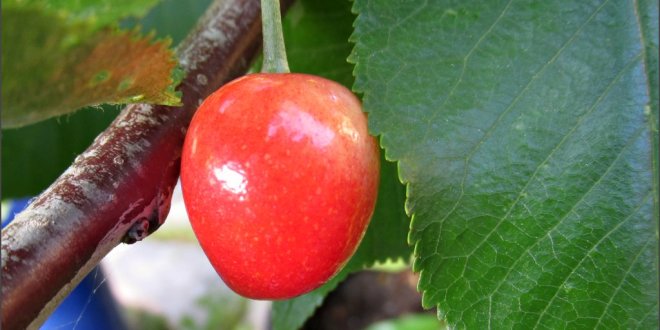 Lapins are frequently referred to as “self-fertile Bing”. I have not had much luck with this tree. It would get flowers but few fruit. I thought that maybe it was not a Lapins so I bought a Bing cherry tree to cross-pollinate. But, as advertised, the Lapins flowers about 2 weeks prior to the Bing. This means the Lapins flowers are finishing when the Bing flowers are starting. I think the real cause is that the Lapins has a recommended chill of 800-900 hours of temperatures below 45 degrees that Sunnyvale rarely achieves (Sunnyvale usually gets about 500 hours of chill).
It makes a nice shade tree though:)

Lapins are advertised as producers of large crops of delicious dark fruit nearly one inch in diameter, without the need for a pollenizer. Its purplish red flesh is firm and sweet. Showy pinkish-white flowers appear mid-spring followed by a prolific harvest from late June to early July. Good pollenizer for other sweet cherries. Intolerant of deep frost or intense heat.