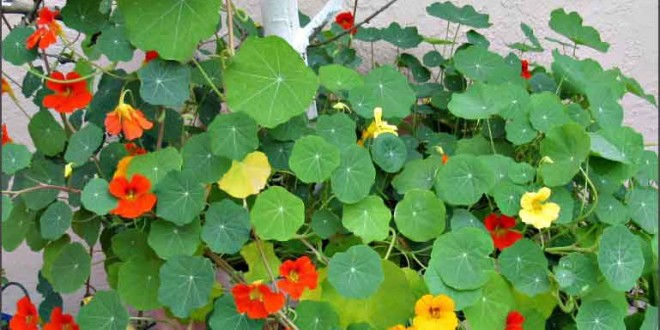 February 2016 was warm and dry. There was a lot of weeding. Mostly mustard and grass.

Finally, this first weekend in March, the forecast is for heavy rain for the next week. And by heavy I mean two to four inches (which is a lot for Sunnyvale because it averages only 15 inches a year). 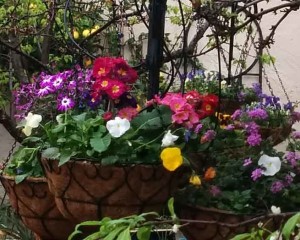 I refreshed all my hanging baskets with new flowers. I replaced the coconut fiber liners. In the larger baskets (16-inch wide) I used taller (12-18 inches) plants like purple and pink Pericallis, multi-colored Primrose, and purple Lantana, surrounded by shorter plants like Bacopa, Lithodora, Pansies and Violas. I have drip-irrigation running to the hanger poles but the plants still require more shade in the afternoon because of the solar heat reflected off of 9 foot tall stucco walls. 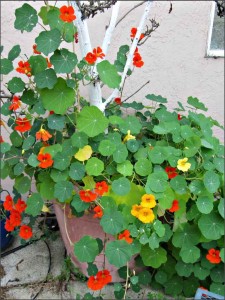 I planted a lot of nasturtiums in the dwarf apple pot. They are going wild, as desired. The name nasturtium comes from the Latin words for nose (nas), and tortum (twist), referring to a persons’ reaction upon tasting the spicy, bittersweet flowers and /or leaves. Most people add them to salads. Note: I painted the trunk of the apple tree white because of excessive cracking of the bark.

Our spring bulbs are starting to bloom. The anemones were very showy earlier in February. 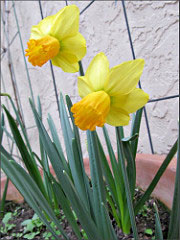 The daffodils are their usual bright yellow. Freesias starting opening and releasing their strong scent in the last few days. Ranunculas are starting to form flower-heads. The only disappointment are the tulips that are small and stunted. I suspect that they did not get enough chilling hours since I planted them late last year and we have had a warm winter.

The Nootka Rose garlic that were planted in November continue to grow. Nootka Rose is an heirloom silverskin type of garlic that originated in the San Juan Islands of Washington State. The cloves have rose-tinted wrappers underneath the outer white skin, making for good visual appeal. It’s a great choice for growers in warm climates as it tolerates heat well. It’s one of the last silverskin garlics to mature and also stores well, so you can extend your fresh garlic eating season by planting some of these cloves in the fall. The flavor is bold with a medium amount of spiciness, and each bulb is fairly large, having around 15–20 cloves each. Softnecks are the most common types of garlic found in your local grocery store. They are a great choice to grow because they are adapted to a wider range of climates, and tend to mature later and store longer than hardneck types. Other differences include more irregularly sized cloves, overall higher yield, and failure to produce a flowering stalk (well, most of the time). 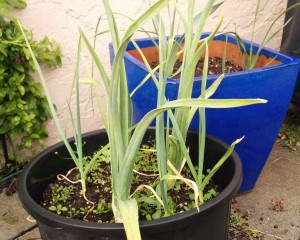 I also planted Elephant Garlic (which is actually a leek). Later in the spring, they will produce a tall hollow tube called a scape with a globe-shaped flower head called an umbel that is filled with bulbils. The flower head is very pretty. Some gardeners cut off the scape to prevent flowering (so the energy is directed to producing larger bulbs). I don’t bother with that because the flowers are pretty and the elephant garlic is plenty large already. 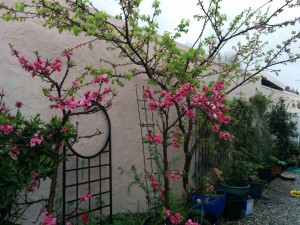 Our cherry trees are now blooming, including my grafts from Spring 2015. The stone fruit trees (apricots, plums, and nectarines) are finishing their bloom. Due to the drought of the past year and the warm and dry winter, I elected not to perform a dormant fungicide spray. Later in April, I will see if I regret that.

The mulberry tree that I planted in Spring 2015 has flowers but you need a microscope or a macro-mode camera to see them.

I have harvested the last of the tangerines and the navel oranges. The warm weather hastened the harvest by several weeks. The lemon and lime trees is flowering now. 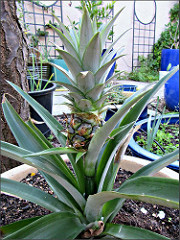 I bought a pineapple plant in February 2016. If I can avoid overwatering it, I think it will do well. Pineapples are fascinating because of Fibonacci and CAM.

Pineapples, like a number of other plants, grow in a pattern that is a Fibonacci sequence (where each row is the sum of the previous two rows).

Pineapples also use Crassulacean acid metabolism, also known as CAM photosynthesis, which is a carbon fixation pathway that evolved in some plants as an adaptation to arid conditions. In a plant using full CAM, the stomata in the leaves remain shut during the day to reduce evapotranspiration, but open at night to collect carbon dioxide.

The winter vegetables I planted in November (cabbage, kale, carrots and beets) continue to grow but the obstacles to a bountiful harvest are huge. The winter is neither cold or long enough and these crops do better in the ground rather than in containers.

In our courtyard, all the plants are taking advantage of cooler temperatures and extra water. The Nandina (Heavenly Bamboo) is covered in red berries. The white blossoms of the jade plant in January have finished. In December, I planted Helichrysum Bracteatum in a pot. The flowers are now blooming 6 feet up. The salvias (Black-and-blue, pineapple) are starting to flower. The pink knotweed groundcover is booming.

The Dave’s Garden website has detailed info on thousands of plants.