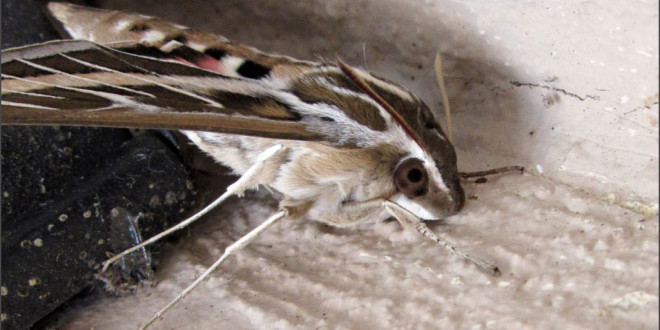 The White-lined sphinx (Hyles lineata), commonly known as the hummingbird moth, is a moth of the Sphingidae family. Its range extends from Central America, through the United States and into parts of Canada.

The forewing is dark brown with a tan stripe which extends from the base to the apex. There are also white lines that cover the veins. The black hind wing has a broad pink median band. It has a wingspan of 2 to 3 inches.[2] The moth is sometimes referred to as a Hummingbird Moth because of its similarity to the Hummingbird in appearance and flight characteristics.

While the month is pretty and even its caterpillar is pretty, I don’t appreciate the caterpillar’s massive consumption of my tomatoes.
The caterpillars of this species eat: