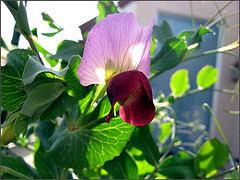 Share
The snow pea (Pisum sativum var. saccharatum) is a variety of pea eaten whole in its pod while still unripe. The name mangetout (French for “eat all”) can apply both to snow peas and to snap peas.

In our Sunnyvale garden, USDA zone 8-9, snow peas are a rainy-season crop. You want to plant early to avoid the warm weather starting in May while balancing the risk of infrequent frosts. This season I planted the snowpea seeds in January. Our first harvest is in early April.

Snow peas, along with sugar snap peas and unlike field and garden peas, are notable for having edible pods that lack inedible fiber (in the form of “parchment”, a fibrous layer found in the inner pod rich in lignin) in the pod walls. Snow peas have the thinner walls of the two edible pod variants. Two recessive genes known as p and v are responsible for this trait. p is responsible for reducing the schlerenchymatous membrane on the inner pod wall, while v reduces pod wall thickness (n is a gene that thickens pod walls in snap peas).

The stems and leaves of the immature plant are used as a vegetable in Chinese cooking, stir-fried with garlic and sometimes combined with crab or other shellfish