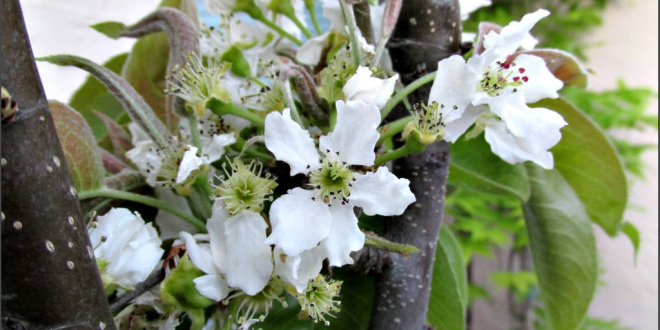 Asian pear (aka Chinese, Japanese, Oriental, sand and apple pear). They are not apples.

Because you have a small garden, I recommend a dwarf or ultra-dwarf rootstock to help keep the tree small. Development of multiple secondary and tertiary scaffolds is important in preventing tree death from fire blight.

Pears do best in soils with a pH of 5.9 to 6.5. Test your soil before planting and follow the recommendations. Pear trees should be fertilized annually, using a split application. Use tree fertilizer spikes or apply a half to a third cup of 10-10-10 fertilizer per year of tree age with a maximum application of 8 cups per tree. Half of the amount should be applied before growth begins and the other after fruit set. Broadcast each application over an area that corresponds with the drip line of the tree. If fruit set is poor, do not apply the second half of the application. Too much nitrogen may encourage shoot infection by fire blight.

If the trees are heavily pruned, reduce the amount of fertilizer applied in relation to the severity of pruning. Heavily pruned trees most likely will not need fertilizer for a year or two. Also, if the pear trees make too much vegetative growth, reduce the rate of fertilization for the next year. Shoot growth on bearing pear trees should average 8 to 12 inches annually.

On young trees, a good portion of the fruit is borne at or near the tips of 1-year-old shoots. As the tree matures, most of the fruit is produced on the scaffold branches. These spurs have a productive life of about 10 years. Pruning should be done to remove about 10 percent of these terminal spurs every year.

Asian pears are often hand-thinned twice during the early growing season. The home grower may choose to thin only once. This should be done 14 to 40 days after petal fall. One fruitlet should be left on every other spur cluster or about 6 inches between fruits.

A limiting factor to good fruit production with Asian pears is that it sets too many fruit. Heavy fruit thinning is essential to encourage large fruit and prevent limb breakage. This should be done within six to eight weeks after flowering when the fruit is dime-sized.

Fire blight is the greatest problem limiting the production of Asian pears. It is important to select resistant varieties, adopt good sanitary measures and avoid excess nitrogen fertilization to help reduce this disease. Prune infected branches 18 inches below the affected area and burn or bury all infected material. Clean pruning tools between cuts with a dilute solution of household bleach (one part bleach to nine parts water). Remove blighted limbs during the dormant season.

Coddling moth and aphids are the most common insect problems.