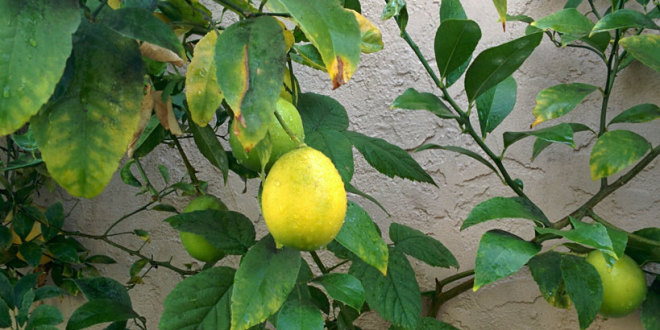 The Meyer lemon, Citrus x meyeri, is a citrus fruit native to China thought to be a cross between a true lemon and either a mandarin or common orange.

The Meyer lemon fruit is yellow and rounder than a true lemon. The skin is fragrant and thin. Meyer lemon fruits have a sweeter, less acidic flavor than the more common Lisbon or Eureka supermarket lemon varieties. The pulp is a dark yellow and contains up to 10 seeds per fruit.

Citrus × meyeri trees are around 6 to 10 ft (2 to 3 m) tall at maturity, though they can be pruned smaller. Their leaves are dark green and shiny. The flowers are white with a purple base and fragrant. Citrus × meyeri is reasonably hardy and grows well in warm climates.

Most of you would prefer a Meyer Lemon tree on dwarf stock rather than standard size. A dwarf-rootstock tree yields dozens of lemons. A tree grown from seed or on standard rootstock (standard) usually begins fruiting in four years yielding hundreds of lemons. While trees produce fruit throughout the year, the majority of the crop is harvest-ready in winter. Trees require adequate water, but less in the winter. For maximum yield, they should be fertilized during growing periods.

Meyer lemons are popular as ornamental plants due to their compact size, hardiness and productivity. They are highly decorative and suitable for container growing. I recommend at least a pot at least 2 feet deep.

It was introduced to the United States in 1908 by the USDA agricultural explorer Frank Nicholas Meyer. By the mid-1940s the Meyer lemon had become widely grown in California. However, at that time it was discovered that a majority of the Meyer lemon trees being cloned were symptomless carriers of the Citrus tristeza virus, a virus which had killed millions of citrus trees all over the world and rendered other millions useless for production. After this finding, most of the Meyer lemon trees in the United States were destroyed to save other citrus trees.

A virus-free selection was found in the 1950s and was later certified and released in 1975 by the University of California as the ‘Improved Meyer lemon’ — Citrus × meyeri ‘Improved’.