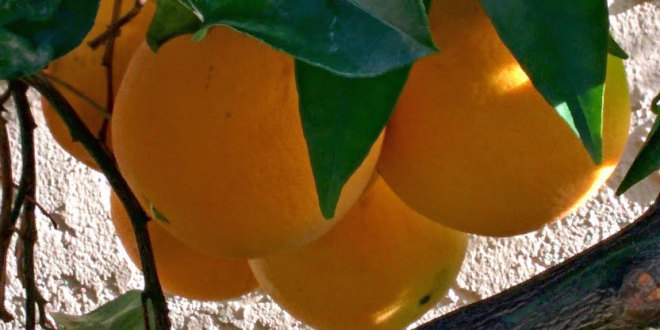 The Washington Navel Orange is the go-to Sweet Orange.  It is famous for its winter fruits.  The seedless fruit is flavorful, juicy and peels easily.  They hold well on the tree, but will drop early in dry and hot climates.

Parentage/origins: Washington navel orange is also known as the Bahia for the Brazilian city from which it was imported into the United States in 1870. I is believed to come from a bud sport found in a Selecta orange tree in the early 1800s. Upon its arrival at the USDA it was propagated and trees were sent to California and Florida. Those sent to Eliza Tibbets in Riverside, California found an ideal climate for their culture. These exceptionally delicious, seedless, easy-peeling fruits quickly attracted the attention of citrus growers, and within a decade the “Washington” navel orange, as it came to be known, was the most widely planted variety in the area. 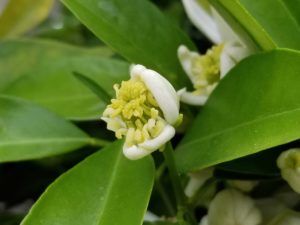 The only sure-fire way to know when your fruit is ready for harvest is to sample it. Most varieties’ rinds may appear fully colored months before they have sufficiently ripened on the tree. For this reason it is best to err on the side of caution, as Washington Navel Oranges can be left on the tree for weeks after they have ripened with little effect on quality.  Hot and dry weather will result in early dropping of the fruit, however.

Often times Citrus fruits will start dropping as a result of high heat and low humidity.  This is sometimes unavoidable, but is exacerbated by very dry soil.  If you have extensive fruit drop (especially in summer), be sure that the soil is moist.

Fertilize mature citrus trees by giving it 1-1 ½ lbs. of actual nitrogen. Do this by using one-third of the fertilizer in late winter, one-third in June, and one-third in August. Be sure to fertilize not only right under the tree but well beyond the tree’s branch spread. Afterwards, water the tree deeply.

Citrus is susceptible to aphids, mites, scale insects, and mealybugs.

Season of ripeness at Riverside: November to January

It was probably a limb sport that was found in a tree of the Selecta variety near Bahia, Brazil, and first propagated some time between 1810 and 1820.  In the opinion of the writer, it is more likely that the parent variety was the Portuguese navel (Umbigo) orange described by Risso and Poiteau (1818-22) and that it originated somewhat earlier.

The marked superiority of the new variety was noted by travelers and visitors and led to its introduction into Australia in 1824 and Florida in 1835.  It is known that trees were sent from Australia to California as early as 1870. The name “Washington” came when 12 trees from Bahia was received in Washington DC. These were planted in a greenhouse and immediately propagated for distribution.  Several years later trees were sent to a number of persons in California and Florida.  Among those who received trees were L. C. Tibbets of Riverside, Alexander Craw of San Diego, and Edwin Kimball of Hayward (Butterfield, 1963, p. 34).

It was the Tibbet planting, however, that resulted in the name Washington being attached to this variety and brought it into prominence.  It is believed that Tibbets received and planted three trees in his dooryard, located near the present junction of Central and Palm Avenues, two of which survived and became sources of budwood a few years later.  In 1903, one of these was transplanted to a location in front of the Glenwood Hotel (now the Mission Inn) where it survived only a few years.  At about the same time, the other tree became the property of the City of Riverside and was removed to its present location at the head of Magnolia Avenue, where it still exists, although in a condition of decline from which it seems unlikely to recover.

Planted in March, 1874 (Mills, 1943), the Tibbets trees came into bearing early and the fruit soon attracted local attention.  Exhibited at a citrus fair in Riverside on January 22, 1879, by the Southern California Horticultural Society, it was awarded first prize over other navel oranges, all of which were from stock previously imported from Australia.  The Washington was so superior that enterprising nurserymen and growers propagated it extensively and within a decade or two it became the leading variety, a position it held for many years.  Thomas W. Cover, a local nurseryman and grower, who also exhibited it at the above-mentioned fair, is credited with having first propagated the Washington variety.  From California it early spread to other parts of the citricultural world and soon became a major variety, now second only to Valencia.

A Presbyterian missionary and his wife in Bahia brought this As to whom credit is due for calling the Bahia navel orange to Mr. Saunder’s attention and providing the budded trees received by him in 1870, the facts are somewhat uncertain.  Coit (1915, p. 17) states that a woman missionary stationed at Bahia was responsible, but Webber (1943, p. 531) credits F. I. C. Schneider, whom be states was the first Presbyterian missionary sent to Bahia.  It seems likely that both statements are correct and that the transaction involved both Mrs. Schneider and her husband, for in later correspondence Mr. Saunders stated that his correspondent was a woman.

Although early introduced and planted extensively in Florida, this variety has proven to have only limited commercial value there.  It tends to produce poorly and the fruit is generally large, coarse-textured, and of poor quality.  It is clearly not well adapted to hot, semitropical climates.  There are several other navel varieties or local origin, however, that do much better in Florida and have been planted commercially in recent years, among which are Summerfield, Glen, and Dream.  So far as can be ascertained these are all seedling or mutant clones of obscure.

Presumably having originated as a limb sport, Washington has exhibited a remarkable degree of somatic instability, giving rise by bud mutation to numerous clonal varieties and many chimeras.  That earliest recognized in California is Australian, which may have originated in Australia but more likely in Brazil.  It is more vigorous but commercially nearly worthless.  Some of the earlier introductions into Florida seem likely to have been mutant clones.  The principal varieties known to have originated in California as limb sports include Thomson, Carter, Robertson, Atwood and Gillette.  Of little or no importance are Navelencia, Nugget, Buckeye, Riverside Early, Surprise, Yellow, and Summernavel.  Several have been reported from South Africa and Australia.

There are also a number of named clonal selections and at least one nucellar clonal budline currently under propagation.

Although a number of outstanding trees have been selected and registered for use in propagation, three have been of principal interest in recent years, namely Eddy, Parent (Original, Tibbets), and Warren.  Eddy was named for the owner of a superior orchard in Arlington, California, the clone of which traces back to an outstanding tree at East Highlands.  Warren goes back to an outstanding tree near Glendora, California, that was selected by C. M. Warren, long-time prominent citrus nurseryman.  Parent, as the name and synonyms indicate, is the last remaining tree of the Tibbets introduction from Washington, D.C., and hence the original clone to which this variety traces in California.  Unfortunately, for some years past it has been declining in vigor and in 1967 seemed unlikely to survive much longer.  Other selections that have been used somewhat include Cram and Fisher.”