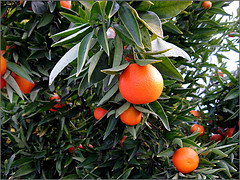 Share
The tangerine (Citrus tangerina) is an orange-colored citrus fruit that is closely related to the mandarin orange (Citrus reticulata). Tangerines are smaller than common oranges, and are usually easier to peel and to split into segments. The taste is considered less sour, as well as sweeter and stronger, than that of an orange.

A ripe tangerine is firm to slightly soft, heavy for its size, and pebbly-skinned with no deep grooves, as well as orange in color. Peak tangerine season lasts from Autumn to Spring. Tangerines are most commonly peeled and eaten out of hand. The fresh fruit is also used in salads, desserts and main dishes. The peel is dried and used in Sichuan cuisine. Fresh tangerine juice and frozen juice concentrate are commonly available in the United States. The number of seeds in each segment (carpel) varies greatly.

A popular alternative to tangerines are clementines, which are sometimes called seedless tangerines and are also a variant of the mandarin orange.