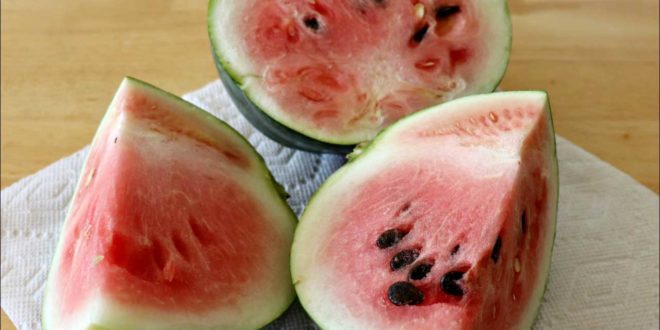 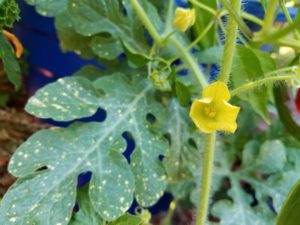 The “Moon and Stars” melon is a century-old heirloom from Tennessee/Missouri.  It is a large-fruited melon whose dark-green rind is speckled with tiny yellow dots (the stars) surrounding one or more larger yellow spots (the moon). It is cool that the leaves have the same pattern. Another cool thing is that this is an heirloom melon, not a hybrid, so if I save the seeds and plant them next year I can trust that the same melon will grow.

Like squash and cucumbers, watermelon should really be grown in the ground. I planted mine in the jumbo 60-gallon pot that holds the Mission fig tree. Watermelons (Citrullus lanatus) like many other melons, cannot produce fruit if they are not pollinated. A watermelon plant is a cucurbit and as such bloom with both male and female flowers and can be pollinated without the help of another watermelon plant. In order to pollinate the watermelon plant, pollen from the male flowers must make its way to the female flowers by one method or another. To give them an advantage it is recommended to plant at least 3 seeds in a hill. Mine sprawled over the edge and ran 6 feet in each direction.   It can get up to 25 pounds if started early in the season. I planted my seeds lin June. As of harvest on September 26, it was 4 pounds. Watermelons need a lot of watering to grow large. 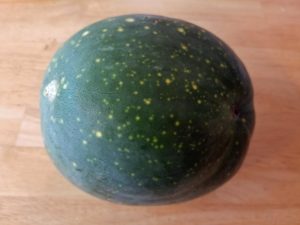