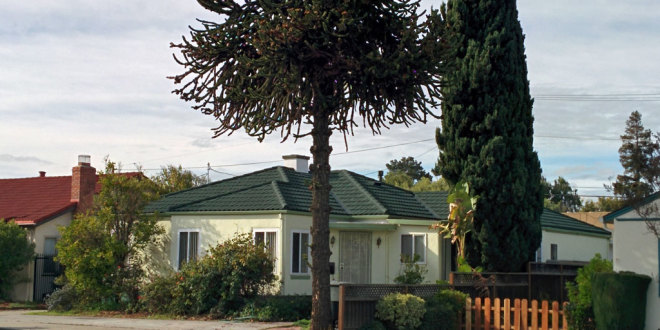 The Monkey Puzzle tree is an exotic conifer. You can see a young example at 545 S. Sunnyvale.

Araucaria araucana (commonly called the monkey puzzle tree, Chilean pine, or pehuén) is an evergreen tree growing to 40 m (130 ft) tall with a 2-m (7-ft) trunk diameter. The tree is native to central and southern Chile and western Argentina. It is the national tree of Chile.

Instead of needles like a pine or scales like a fir, the leaves are thick, tough, and scale-like, triangular, 3–4 cm long, 1–3 cm broad at the base, and with sharp edges and tips. They persist for 10–15 years or more, so cover most of the tree except for the older branches. 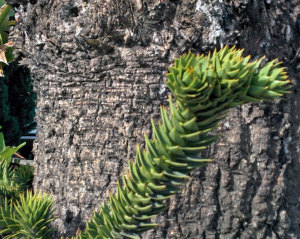 This tree is usually dioecious, with the male and female cones on separate trees, though occasional individuals bear cones of both sexes. The male (pollen) cones are oblong and cucumber-shaped, 4 cm long at first, expanding to 8–12 cm long by 5–6 cm broad at pollen release. The tree is wind pollinated. The female (seed) cones, which mature in autumn about 18 months after pollination, are globose, large, 12–20 cm in diameter, and hold about 200 seeds. The cones disintegrate at maturity to release the 3– to 4-cm-long nut-like seeds.

Araucaria araucana is the hardiest species in the conifer genus Araucaria. The genus Araucaria was once widespread but now its species are geographically distant from each other. The species araucana (Monkey Puzzle) is located in South America; The species heterphylla (Norfolk pine) is located on an island between Australia and New Zealand; and the species bidwillii (bunya-bunya) is located in Australia. Because of the great age of this species, it is sometimes described as a living fossil. The fossilized trees in the Petrified Forest in Arizona are the araucana species.

Plumbago can be grown as a bush or a climber-vine. You don’t need much room …