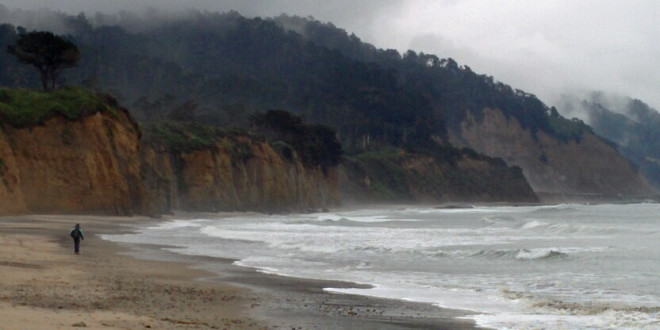 Año Nuevo Point was named on January 3, 1603, over 400 years ago, by Father Antonio de la Ascension, chaplain for the Spanish maritime explorer Don Sebastian Vizcaíno. The Quiroste, a group of Ohlone Indians, lived here at least on a seasonal basis in order to hunt, fish, and gather abalone and other shellfish from the sea.

The Quiroste were a significant and wealthy tribe in the central California coast region. This wealth was based on the bountiful resources and location of their territory. The location that the Quiroste tribe called home was situated between the rocky coast and forested coastal mountains. Their wealth was derived from the materials for tool-making and currency found on their territory. The preferred material for stone tool making in the region was Monterey chert. The main quarry for Monterey chert was located on a seldom exposed reef off of Año Nuevo Point. The Quiroste became the sole suppliers of this highly prized lithic material to the surrounding regional tribes. Another source of their wealth was olivella shells which were used as currency in prehistoric California. As the olivella shell bead currency trade began to expand throughout the area, the Quiroste gathered the shells and monopolized the developing prehistoric economy. In essence, they became the treasury of these shells and could control the export of this highly valued resource. These assets and wealth, along with their natural territorial fortifications of mountains and sea, allowed the Quiroste to establish their strength and prominence as a Tribe.

Ohlone contact with Europeans finally occurred in 1769, when the “Spanish Governor of the Californias,” Gaspar de Portola, led an overland expedition northward in search of Monterey Bay. On October 22, the expedition arrived at Waddell Creek with many of the men suffering from what we now call scurvy. The next day, many of the men felt much better. They named the location Canada de la Salud. It is almost certain that they ate wild rose hips which are high in Vitamin C.

Later that day, the expedition arrived at a Quiroste village of 200 natives on Whitehouse creek. The Quiroste welcomed them with demonstrations of pleasure, and gave them some tamales made of seeds, some of acorns and some of other kinds of seeds, as well as a certain kind of honeycomb. They brought it very neatly wrapped in leaves of the reed grass. Their gift was repaid with beads, which pleased them greatly. In the middle of the village there was an immense house of a spherical form, large enough to hold all the people of the town, and around it there were some little houses of a pyramidal form, very small, constructed of stakes of pine. After a few days they offered guides to the expedition and led them out of their territory.

The expedition diaries do not mention the elephant seals for several reasons: The seals were not present in October and also, at that time, the seals only occupied Ano Nuevo Island.

The Methuselah Tree. Over the years, I have bicycled and drove on Skyline Blvd a …