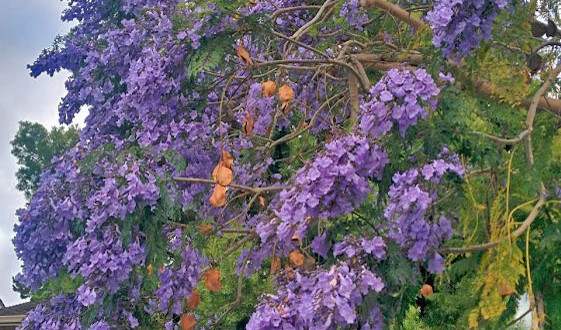 In late spring and early summer, streets are awash with the magnificent purple-blue blooms of jacarandas (Jacaranda mimosifolia). As well as being superb street trees, jacarandas look stunning on their own as a specimen tree in an open lawn, where their fallen flowers form a colorful carpet of blue. My Sunnyvale garden has no room for the jacaranda but beyond my garden, just around the block, there are several examples of these beautiful trees.

Jacarandas are native to Brazil, where they are deciduous, not because of cold winters, but because of the monsoonal wet and dry seasons. They briefly drop their leaves at the end of the dry season, then leaf up again when the rains come.

These trees can reach a height of around 30-45 feet, and a spread of the same size, so you need to be careful where you plant them, as they can extend a long way. One big mistake some people make is to let a jacaranda overhang their swimming pool, where the fallen flowers rapidly clog up the pool’s filter. However, planted in the right spot, a jacaranda is a magnificent shade tree.

While the most common flower color for jacarandas is the lovely purple-blue, there is a white-flowered form called ‘White Christmas’, but it is much harder to find this one at nurseries, and you’ll probably need to get it ordered in for you. For the most reliable blue color, and faster flowering, look for a modern grafted form. Jacarandas are readily available at nurseries in tropical and warm temperate zones.

Jacarandas thrive in tropical and warm temperate climates, but they can be grown in cooler areas which get light frosts, but they usually don’t flower as well in these cooler zones, and they are also slower-growing, and smaller there.

Jacarandas like a sunny position and well-drained, fertile soil, plus regular summer watering. Mulching around the roots with organic material (e.g., compost, straw, bark, etc) will help to retain soil moisture in summer, but only apply the mulch over moist ground, not over dry ground, otherwise the mulch might prevent rain reaching the soil. A thickness of no more than 50mm of mulch is recommended.

While jacarandas can be grown from seed, their flower color varies more and they take longer to flower, but as seedlings often pop up around the base of trees, transplanting them is worth a try and doesn’t cost a cent.

Forget about pruning jacarandas altogether or you will spoil their good looks, and the tree’s shape, forever. When you prune a jacaranda it then sends up vertical shoots (you’ll often see the effect on jacaranda street trees which have been pruned to make room for overhead power-lines). The normal shape for a jacaranda is that of an elegant umbrella, and the appearance of vertical branches ruins its good looks. Your only solution, if you have pruned a jacaranda, is to persist in cutting off the vertical shoots.