Pulgas Ridge is a small park, part of the Mid-Peninsula Open Space District, off of I-280 near Edgewood Road, just north of Edgewood County Park. There are about 6 miles of trails in the park with some great climbs and descents with amazing peninsula views. Most trails are single-track with a few paved road sections. The weather is usually mild. The park is dog friendly. Dogs are allowed on all trails and there is even a 17-acre off-leash area.

Pulgas Ridge is home to about 90 native species of trees, shrubs, ferns, and flowers. Wandering the trails in early spring, visitors will see many wildflowers, such as Indian warrior, hound’s tongue, mule’s ears, and milkmaids, in addition to three members of the lily family: fetid adder’s tongue, giant trillium, and mission bells. During the rainy winter, there are many varieties of mushrooms including chanterelles, turkey-tails, and others. 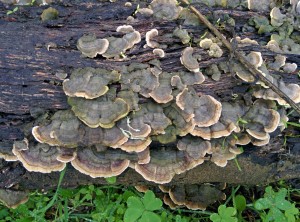 Trametes versicolor, commonly called turkey-tails or shell mushrooms, is one of the most common mushrooms in North American woods, found anywhere there are dead hardwood logs and stumps to decompose. Its cap colors are extremely variable, but are usually in buff, brown, cinnamon, and reddish brown range. 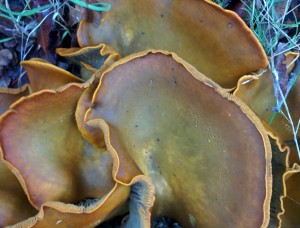 California oak chanterelles dwarf the competition due to indeterminate-growth. Most mushrooms, and even most chanterelles, produce a short-lived fruit body with a spore-bearing surface, shed their spores, and then rot away. Cantharellus californicus continues to add fertile layers atop the old — producing spores over a period of weeks or months rather than days, and growing ever larger and more complex in shape over time. The caps can grow to over twelve inches wide.

Fall and winter is the most productive season for chanterelles, but they can appear through the spring and even in the summer in areas of coastal fog drip. Early rains can stimulate the mushroom mycelia to form numerous primordia, knots of tissue representing chanterelles in miniature. Under the right conditions, these primordia become full blown chanterelles with the addition of time and more water.

Warning: California golden chanterelles have one notable toxic lookalike, the “Jack ‘O Lantern Mushroom,” Omphalotus olivascens. This seriously toxic species grows on dead wood (which may be buried in the ground), has deep, true gills with a greenish cast, and orange rather than white inner flesh. My personal choice is to pay the $28 per pound at Whole Foods for certified chanterelles.