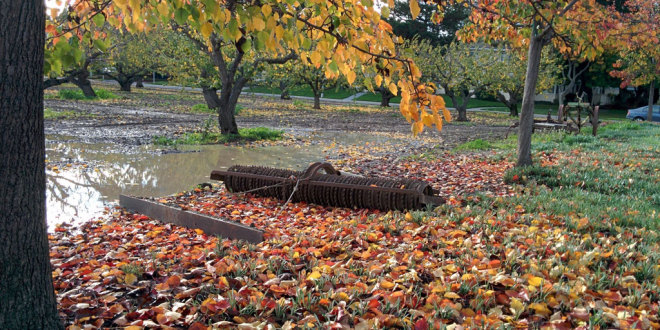 Sunnyvale thoughtfully has preserved its heritage as bountiful agricultural land by reserving a large block of orchards and a replica of the house of some of the earliest Sunnyvale pioneers: the Murphy family.

In 1994, the City of Sunnyvale preserved ten acres of Blenheim apricot trees to celebrate the important contribution of orchards to the early development of the local economy. The orchard was designated as Heritage Orchard Park by the Historical Society in 1997. The ten-acre orchard has about 80 trees per acre for a total of about 800 trees. In addition, the Orchard Heritage Park Interpretive Exhibit (OHPIE) was built in 2001 next to the orchard. The open barn-like structure presents interpretive displays of the lives of the orchard workers and the process of cultivating and canning fruit in the first half of the 20th Century. Examples of early cultivators and other ranching equipment border the exhibit.

The trees stand on the remains of a 30-acre parcel once owned by Charles Olson of Sunnyvale, and several other local entrepreneurs, including Steve Vidovich and Peter Pavlina of Los Altos. “I’ve been tending these trees for 41 years. That’s almost half my life,” said Charles Olson, the third-generation orchardist. “Why quit now?”

Olson’s operation also became a legacy when Sunnyvale’s Orchard Heritage Park joined Saratoga’s Heritage Orchard and the Los Altos Civic Center Orchard as official landmarks to the visionaries who pioneered the first innovative business of the valley – the largest commercial orchards in the world. Tech pioneers such as Packard and Steve Jobs raised their own apricots as they nurtured their innovative companies.

Today, heritage orchards represent a few tiny stands of green space in an increasingly crowded region, where locals can experience the sensuous scent and perfumed taste of locally grown fruit.

Apricots have been grown in Santa Clara Valley for over 200 years. In his journal, “A Voyage of Discovery to the North Pacific Ocean”, the British explorer, George Vancouver, recorded that he visited the Santa Clara mission on November 21, 1792 and the fathers had planted peaches, apricots, apples, pears, figs, and vines.