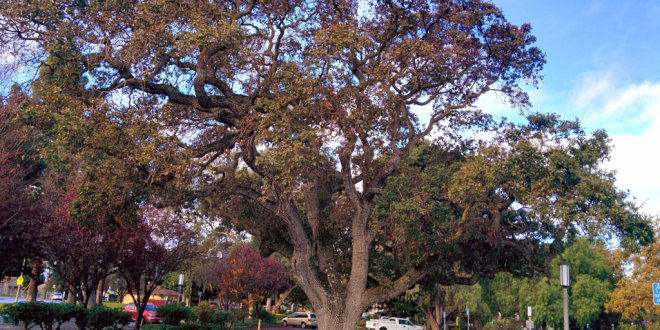 Quercus lobata, the valley oak, grows into the largest of North American oaks. It is only found in California, growing in the hot interior valleys and foothills. Mature specimens may attain an age of up to 600 years. This deciduous oak requires year-round access to groundwater. Sunnyvale still has several prominent and venerable valley oaks.

The Spanish gave it the ‘roble’ which was the name of the white oak tree they knew in Europe. The town of Paso Robles comes from ‘paso de los robles’ or ‘pass of the white oaks’.

In 1792, the English explorer George Vancouver noted on his expedition through the Santa Clara Valley, after seeing an expanse of valley oaks: “For about twenty miles it could only be compared to a park which had originally been closely planted with the true old English oak; the underwood, that had probably attended its early growth, had the appearance of having been cleared away and left the stately lords of the forest in complete possession of the soil which was covered with luxuriant foliage.”