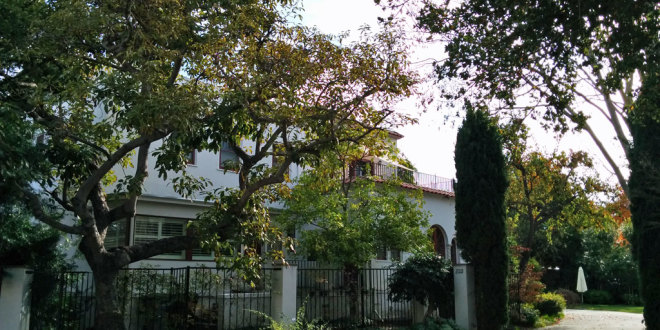 Originally constructed in the 1870s for George H. Briggs and extensively reconstructed in the 1920 for the Henry S. Stelling family, the mansion recounts the history of Sunnyvale. Briggs was one of the earliest pioneers who came from Boston in 1854. Stelling, the son of one of San Jose’s first orchardists, grew pears and award winning cherries.

This large Redwood framed two and a half story Spanish Eclectic style residence with its stuccoed walls, flat-tiled roofline, and wrought iron balconet was erected in 1924. It was built essentially on the footprint of its predecessor, an Italianate style Victorian farmhouse dating from the 1870s which underwent substantial reconstruction after a fire in the1890s. The current building’s asymmetrical plan, the angled bay on the facade, and some grey and white ship-lap siding still visible in the basement are the only suggestions of its earlier appearance.

George H. Briggs, the first owner-builder, was a Boston crockery merchant. He left Massachusetts in 1850, walked across the Isthmus of Panama, and acquired his first land in Santa Clara Valley in 1854 through “possessory right to 80 acres.” His neighbor was another pioneer settler, William S. Hollenbeck, whose daughter Elsie married Briggs in 1858. Soon after George’s father became sick, so he and Elsie returned to Boston to manage the crockery store. In early 1863 Hollenbeck wrote them and offered Briggs 160 acres of land if he would return to California and help remove squatters from his property. Briggs sold the crockery business and returned to the Santa Clara Valley.

Briggs’ 160 acres were surveyed in 1866 and the final patent was approved in May 1870. At the time he had “30 acres under prunes, pears and cherries, and the balance under grain and hay.” In 1881 he planted a vineyard. “At one time we could see seven wineries from our house,” said Caroline E. Briggs in a 1960 newspaper interview: “The Delmas, Collins, Howe, Phelps, Montgomery, Heney, and Lawrence Station.” But a drought in 1896 and 1897, coupled with phylloxera, required removal o fthe vines in 1898. The Briggs family then went into the fruit business and were the first farmers in Sunnyvale to employ a steam-powered engine for irrigation.

In 1906 Henry G. Stelling, son of one of San Jose’s first orchardists, purchased 50 acres from Briggs, including the old home. Because of the rich build-up of loam, which went down 25 25 feet, Stelling determined to add cherries to existing fruit crops, and he built a packing shed on the property. His cherries found a nationwide market under the “Medal of Honor” label, which referred to awards he received at the 1915 Panama-Pacific International Exposition in San Francisco.

In the early 1920s the family began remodeling house, living under a tent in the yard while the work progressed. The new residence retained from the earlier home only the living room and hardwood floor with its inlaid strip of mahogany. Although the Stellings sold 32 acres of their ranch to subdivider Joseph Eichler in 1957 or 1958, they retained the house plus the extensive gardens which Mrs. Stelling had nurtured and maintained over the years. Her garden was a local showcase designed in part by an English landscape architect. Unfortunately the pools, fountains, and formal rose garden gave way to a 10 unit housing development which today surrounds this Landmark house.

The above notes are from a Sunnyvale Landmarks document