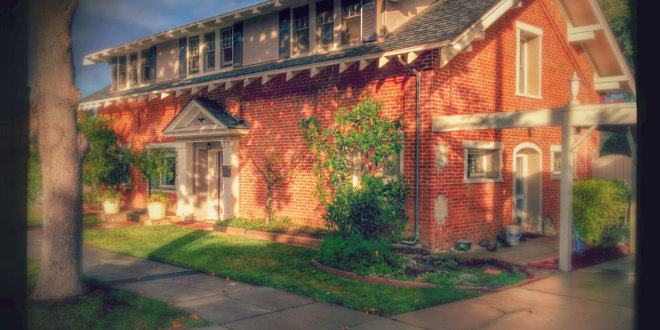 Built in 1881 by the Collins brothers, the Collins-Scott Winery is the oldest brick building in Sunnyvale. In 1889 a private railroad spur was built on the property and more than 300 gallons of wine were shipped daily. In 1927 all of the buildings except the brick distillery were destroyed by fire. In 1965, the present owers, the Duane Heinlen family, remodled the structure as it stands today. This building is a half mile from my home.

This comfortable brick and stucco residence is graced by a gabled roofed, long shed dormer, and classical portico entrance. It was built in the early 1880s as a two story distillery, part of the successful Scott-Collins Winery.

Lemuel and Salvin Collins came to California from New York in the early 1850s. Salvin became a partner in a popular Montgomery Street saloon in San Francisco, and his brother took up farming, in 1862 purchasing 320 acres of land in what is now Sunnyvale. Lemuel died in 1879, and Salvin took over his brother’s farm, planting 160 acres in grapes. He soon constructed a four story brick winery and this landmark distillery building. From these he supplied his saloon and “chop house,” by this time a quality restaurant known for its “fine wines and liquors.”

Salvin died in 1884, and his widow Angelina Russell Collins assumed responsibility for the winery. By 1889 she shipped over 300 gallons of wine daily and brought a private railroad spur on to the property. Angelina married San Francisco importer Emerson Wesley Scott in 1890, and he assisted her in the business. Then known as the Pebbleside Vineyards and Winery, they could produce 550,000 gallons of wine and 2,000 gallons of brandy annually. A ton of grapes results in about 155 gallons of wine, so they had 3580 tons. A low yield of 3 tons per acre would require 1200 acres or grapes. A high yield of 5 tons per acre would require about 700 acres. At San Francisco’s 1894 Mid-Winter Fair in Golden Gate Park, Pebblestone won first prizes for its Petit Pinot and Zinfandel, and an 1895 San Jose Mercury souvenir booklet cited Angelina as “one of Santa Clara County’s well known winemakers.” Angelina died in 1896, and Emerson Scott passed away the next year.

During the mid-1890s, drought accelerated the spread of phylloxera, a root louse that began plaguing Santa Clara Valley vintners in 1892. The Scott estate continued to rent its vineyards, but diminishing productivity made the winery unprofitable. In 1906 the Pebbleside Poultry Farm took over the former winery, and Marianni Orchards leased the buildings for fruit dehydration. A fire in 1927 destroyed the four story winery, and two years later the Ferguson family purchased the old distillery. They converted it to a summer home, adding the shed dormer windows which reflected the popular California Bungalow style. They designed the first floor, although asymmetrical in presentation, in the Georgian Revival style.

This landmark building was spared destruction by real estate development in the early 1960s, and a thick coat of white paint was removed, exposing the original brick construction. In May 1983 the City of Sunnyvale declared it a Landmark.

The above notes are from the Sunnyvale Landmarks document.