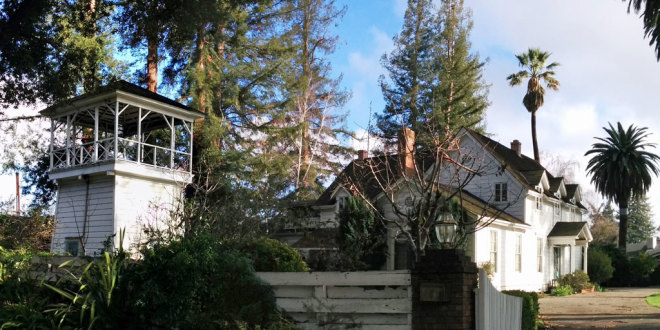 William Wright’s redwood framed, two story, side-gabled farmhouse is the oldest extant residence in Sunnyvale. Located at 1234 Cranberry Avenue. It probably was constructed in 1862 and certainly prior to 1876, when it appears as an illustration in Thompson and West’s Historical Atlas of Santa Clara County.

It is a simplified version of the Gothic Revival style. Its original centered gable, with a lancet window and a full-width open porch, gave way to changing fashion through major remodeling in 1918. Three gabled wall dormer windows modified the second story appearance. The full-width porch was replaced with a central pedimented portico supported on slender Doric columns, helping transform the house into an excellent example of the Colonial Revival style. The portico framed a side-lighted doorway capped with a fanlight transom. The living room was expanded in the 1930s and appears as a one story gabled wing at the east elevation.

William Wright was a department store clerk in Baltimore in the late 1840s. He left Maryland for California in 1849 at age 23, a victim of gold fever. His journey around the Horn from New York to San Francisco took seven months and eight days. He worked in San Francisco, saved his money, and obtained passage on a schooner to Stockton. He worked a claim on the Tuolumne River in 1850, until a spring flood washed out the mine and all the equipment. Wright moved to Chinese Camp, mined there until winter, and then opened a store in the gold fields near China Flat.

In November 1851 he closed out his business and came to the Santa Clara Valley with a partner. His timing was once again perfect, because Martin Murphy, fearful of a swarm of squatters coming down from the gold fields, agreed to sell him 320 acres.They bought 160 acres, traveled back to Stockton to buy implements and a team, and returned to raise grain and stock. Wright hired a man for $100 a month to teach him all there was to know about farming, and in a year’s time he was able to buyout his partner and purchase an additional 160 acres.

Ultimately, we believe, Wright´s holdings grew to about 640 acres – roughly a square mile, covering a rectangular area running from Homestead to about Knickerbocker or El Camino, and from Mary to Bernardo. In later years this farm would be surrounded by other farms with familiar names: Hollenbeck, Stelling, etc.

In 1863 Wright returned to Maryland, where he married Helena Treadwell and brought her back to California. They had 2 children, William Tarleton and Dora (later Dora T. Gibson). After Wright’s death on April 22, 1890, his widow Helena managed 220 acres of the property, raising large crops of wheat and tending a four acre plot of apples, pears, prunes, cherries, persimmons, walnuts, chestnuts, quinces, nectarines, almonds, and figs.

The property had been divided in such a way that Wright’s son William T. inherited 25 acres and the house, and in 1895 he planted 18 acres in prunes, apricots, and peaches. Vegetables were grown between the rows until the fruit trees came into bearing. William T. was killed in an accident in 1912, when he descended into the well and his coat-tails became entangled in the pump motor machinery.

The Wright family lost the ranch and house during the Great Depression, and a retired GM executive subsequently purchased it during the 1930s and expanded the living room. A later owner was Ken Hunter, Sunnyvale’s first City Manager. In 1979, the Wright House was listed as a California State Point of Historical Interest.

A notable feature of the Wright property is the tank house, one of the earliest of a few remaining such structures in Sunnyvale. The area’s success as a fruit growing district resulted in large part to its location along a belt of artisian wells. This made water both plentiful and inexpensive. As the area developed and dry farming gave way to orchard crops at the beginning of the 20th century, smaller farmers were able to tap this exceptional resource without greatly diminishing the ground water supply. The Carl Olson family was typical, buying their first five acres of Sunnyvale land from W. E. Crossman for $750 in 1899 and hiring George Free for $150 to hand drill with an auger an 80 foot well.

When the Joshua Hendy Iron Works established its plant in 1906, they dropped a 700 foot well and used a pump to bring the water into their 50 foot high storage tower. For many years the firm supplied the City with part of this water for free. By the beginning of World War One, most local irrigation pumping was carried out by mechanical means, at first by windmills, then steam engines which were replaced in turn by gasoline engines and then electric motors.

As late as the 1930s, builder Gus Marinello spent much of his time constructing redwood water storage tanks for local 39 orchardists. Modern technology and rapid urban development, however, have removed the tank house as a familiar feature of the Sunnyvale city scape. Some industrial examples still stand along Hendy Avenue, but for the most part the rural farm and domestic tanks no longer exist. The Wright tank house remains a distinctive reminder of Sunnyvale’s long usage of its most critical natural resource, water. Current owners, in 1977 rehabilitation work, moved the structure to the street side of the house, making it more visually accessible to the public.

The above notes are from the Sunnyvale Landmarks document.