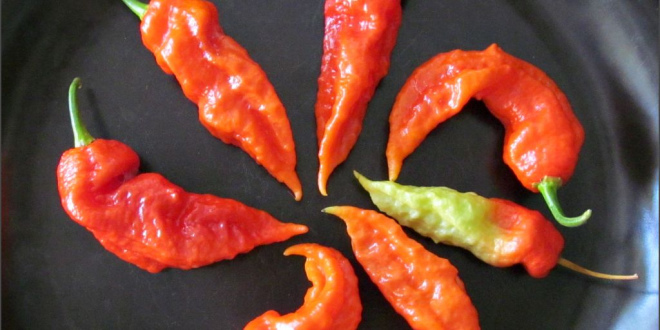 The Bhut Jolokia (aka Ghost pepper) is one of the world’s hottest chili peppers. From seed planting to harvest, it takes roughly 160 days for the “Bhut Jolokia” plant to produce mature peppers. Starting seeds indoors 8 to 10 weeks prior to consistent outdoor temperatures of 70 degrees Fahrenheit or warmer will produce starts ready for transplant into the garden at the opportune time. This means that in Sunnyvale, if you should transplant outdoors no earlier than April 15 for a harvest starting September 30.

The Bhut Jolokia also known as ghost pepper, ghost chili pepper,  ghost chile, naga jolokia, naga morich, bih jolokia, u-morok, and red naga chili is believed to have originated in Assam, India. The word Bhut, given from the Bhutias people, means “ghost” and was probably given the name because of the way the heat sneaks up on the one who eats it.

The Bhut Jolokia is an interspecies hybrid of C. chinense and C. frutescens genes.

In 2007, Guinness World Records certified that the ghost pepper was the world’s hottest chili pepper, 401.5 times hotter than Tabasco sauce (at 2-5K SHU) and twice as hot as the Red Savina pepper; However, as of 2012, it was superseded by the Trinidad moruga scorpion. The ghost chile is rated at more than 1 million Scoville heat units (SHUs). This means that if you add one distilled drop of Ghost Chile, you need to add 13 gallons of sugar water before you would not taste any heat!!!

So what do you do with them besides brag? You can use them in salsas, very sparingly. You can dehydrate them and make chile powder. You can dry them by roasting (Warning: I know from personal experience, that pets and spouses do not approve of this method). One pepper can season over a gallon of vindaloo stew. I make hot sauces from the peppers using vinegar and some vegetable like carrots to handle the heat.

Okay, these chiles are not from my Sunnyvale garden, but I want to share… The …