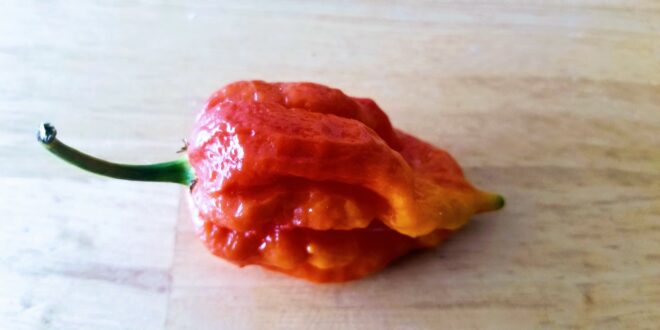 New for 2020: The Carolina Reaper. In our Sunnyvale garden, I have grown a number of hot chile peppers: Habanero, Scorpion, and Ghost Peppers. The Carolina Reaper is a cultivar of the Capsicum chinense plant. Developed by South Carolina breeder Ed Currie, the pepper is red and gnarled, with a bumpy texture and small pointed tail.

The Carolina Reaper was certified as the world’s hottest chili pepper by the Guinness World Records on August 11, 2017. The official Guinness World Record heat level was 1,641,183 Scoville Heat Units (SHU) in 2017, according to tests conducted by Winthrop University in South Carolina. The figure is an average for the tested batch; the hottest individual pepper was measured at 2.2 million SHU.

The sensory heat or pungency detected when eating a Carolina Reaper derives from the density of capsaicinoids, particularly capsaicin, which relates directly to the intensity of chili pepper heat and Scoville scale. The Carolina Reaper was bred in a Rock Hill, South Carolina greenhouse by “Smokin” Ed Currie, proprietor of the PuckerButt Pepper Company in Fort Mill.

The crossbreed is between a “really nastily hot” La Soufriere pepper from the Caribbean island of St. Vincent and a Naga Viper pepper from Pakistan and is named ‘Reaper’ due to the shape of its tail. It has been described as having a fruity taste, with the initial bite being sweet and then immediately turning to “molten lava”.

If you want to grow this pepper, start as early as possible. Plan on 180 days (6 months). I got my first red ripe chile on  September 1.

It’s easy to grow jalapenos in Sunnyvale. Plant them in April and you will have …