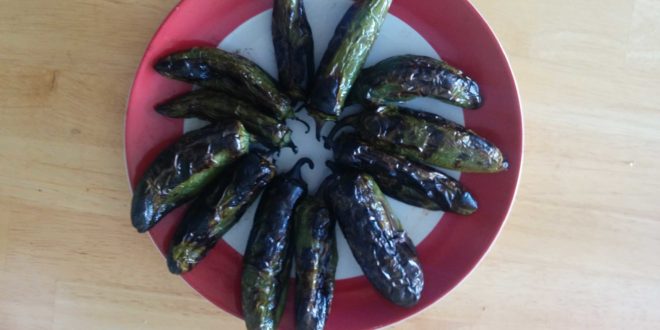 Okay, these chiles are not from my Sunnyvale garden, but I want to share…

The official New Mexico state question is “Red or Green?”.

The Hatch chile peppers are grown in the Hatch valley, and along the entire Rio Grande, from northern Taos Pueblo to southern Isleta Pueblo, are a signature crop to New Mexico’s economy and culture. The chile pepper is New Mexico’s state vegetable.

The New Mexico green chile pepper flavor has been described as lightly pungent similar to an onion, or like garlic with a subtly sweet, spicy, crisp, and smoky taste. The ripe red retains the flavor, but adds an earthiness and bite while aging mellows the front-heat and delivers more of a back-heat. The spiciness depends on the variety of New Mexico chile peppers. 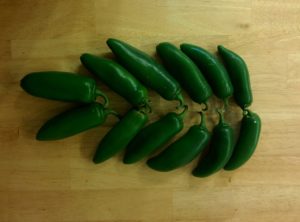 Hatch chile is a group of cultivars of the chile pepper, initially developed by pioneer horticulturist, Dr. Fabián Garcia, at New Mexico State University in 1894. Selective breeding began with 14 lineages of peppers across New Mexico and Southern Colorado’s old Hispano and Pueblo communities. These peppers were selected to have a larger smoother, fleshier, more tapering and shoulderless pod for canning purposes. The first cultivar of this group was released in 1913.  The New Mexico chile peppers are popular in the cuisine of the Southwestern United States and in the broader Mexican cuisine, and an integral staple of New Mexican cuisine.

The Hatch chile, like many chile peppers, should be roasted first to remove the bitter skin. You can roast them using an oven, a skillet, a barbecue, a propane flame, or a roaster. You roast the peppers until charred; put them in a bag to sweat for 15 minutes (to loosen the skin); and then remove the charred skin.

Green Chile sauce in California is milder than in New Mexico. That is because the sauce is either a tomatillo/jalapeno base or an Anaheim chile base. The Anaheim chile pepper is a milder variety of the Hatch Chile pepper.