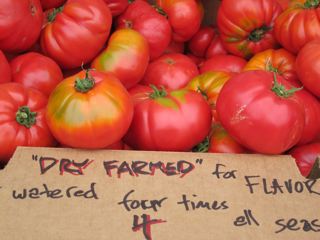 Early Girl is well suited to a technique known as “dry farming”.

Researchers at the Center for Agroecology and Sustainable Food Systems at the University of California, Santa Cruz, are among those who have described the technique: not watering tomatoes after transplanting, forcing the roots to grow deeper to seek out moisture, producing more “concentrated flavor,” and saving water.

Dry-farmed Early Girl tomatoes are popular in farmers markets in the San Francisco Bay Area. The variety is also popular with home gardeners in that region, where it thrives despite the area’s cool and often overcast summers.

Dry-farming is not suitable for containers. Also dry-farming is best for regions that receive 20 inches of rain per year. In the San Francisco Bay Area, these regions would be the coastside and the North Bay. Sunnyvale only averages 12 inches per year.