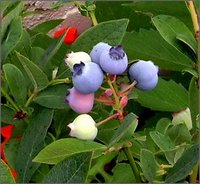 Acidify Your Soil for Blueberries

Reposting of article from HomeGuides.SFGate.com. They have additional articles on this topic.

Blueberries are known for their love of acidic soils, preferring a pH level of 4.8 to 5.5. If you’re discouraged from growing blueberries because of chalky or alkaline soil, take heart. Your soil can be altered both before and after planting to create and maintain the low pH level blueberries prefer. Before you purchase soil amendments — sulfur commonly used for acidifying soil — conduct a soil test to determine how much you’ll need to alter your soil.

Use these warm and cool season vegetable charts at www.mastergarderners.org to decide when to plant …